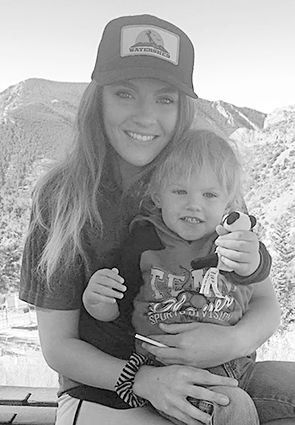 Kelsey Charlene (Fitchett-Howard) Cold, 25, left this world much too early on October 6, 2020, in an accident near her home in Bozeman, Montana. Kelsey was born in Dickinson, North Dakota, on March 17, 1995, to Michelle (Fitchett) Brown and Duane Howard.

Kelsey was a sunny and loving child who won the affection of everyone who came into contact with her warm smile and infectious laugh. She made friends wherever she went and frequently had to be told no as she tried to bring home every stray pet, mistreated child, or friend in need. Her big heart and joyful personality had her surrounded by friends through her elementary and high school years in Thompson Falls Schools.

Kelsey was very active in school and soon became a standout in sports. As a triathlete, she earned many honors including all-state honors in both volleyball and basketball; all-conference honors in all three sports, academic all-state awards, and she was the female athlete of the year for her class. As a standout player on the school's softball team, she inspired others by playing through concussions, back injuries and with her competitive spirit. She was well-known for her dramatic sense of humor and her love for fashion and beauty.

After graduating from Thompson Falls High School in 2013, Kelsey went to Montana State University to study to be a dental hygienist. Over the next few years, Kelsey focused on work and spending time with family in both Montana and Washington. On June 7, 2018, she married Logan Cold and realized her dream of starting a family. Her pride and joy, Kash Anthony Cold, was born on September 18, 2018. Kelsey was a devoted mother whose entire world revolved around Kash. She remained good friends with Logan and was working toward moving closer to her sister Madi to raise their children together.

Kelsey is survived by her beloved son Kash, former husband Logan Cold, her parents Michelle and Gabe Brown of Gypsum, Colorado, and Duane and Laura Howard of Pasco, Washington; her sister Megan and husband Rob Nicholson of Woodinville, Washington; her sister and best friend, Madison Fitchett-Howard and niece Coda of Denver, Colorado. Kelsey is also survived by her grandparents, numerous aunts, uncles and cousins.

A family celebration of life was held in Bozeman on October 10.