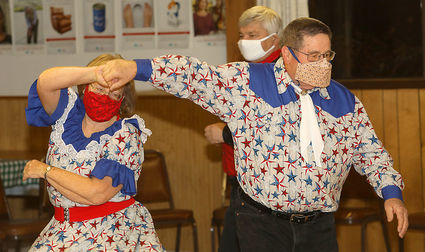 GRACEFUL MOVE – Michael Murray takes his wife, Sharon, through a move during "Love Potion No. 9" at the Montana Mavericks Square Dance Club in Plains.

It's arguably one of the best aerobic exercises around. It takes concentration and precise timing, but with the twirling, twisting, and quick stepping comes dancing to the flow of the music, according to Michael Murray, a member of the Montana Mavericks Square Dance Club.

Even the COVID-19 pandemic couldn't keep Murray and his wife, Sharon, or the 18 others from attending the first dance of the year for the Plains square dancing club at the Plains Paradise Senior Citizens Center Saturday evening.

"It's definitely exercise," said the 75-year-old Murray, who has been square dancing for 11 years and looks forward to the monthly dances at the senior center. He and Sharon wore matching patriotic garb designed by Sharon, who made three other colorful outfits for the dances.

"At the end of the night I'm really tired and the next morning I ache," he said. "But dancing will keep you young," said Murray, who took lessons to learn the numerous moves and square dancing jargon. Murray said a person can't participate in the dances unless they complete the lessons because square dancing is done with four couples - in a group of eight people - that make their synchronized moves together based on commands by the caller, who delivers his directions mixed in music. "Even with the lessons, I guarantee you're going to goof up sometimes," he said.

Murray said that it's tough for a lot of people to exercise, but he thinks square dancers don't look at it as exercise because it's fun and it "just happens to involve lots of movement for extended periods of time."

"Square dancing is especially good for seniors because it is an exercise of the mind as well as the body," said Murray. "We have to think and remember, and do all these things at the same time. We have to use coordination and timing, all sorts of skills at once," he added. "And it is a social activity, so we get a lot of good things just by being with our peers and interacting with people we see only occasionally, and meeting people we don't know."

The club usually provides lessons during the year, which are around six weeks long, but members Saturday evening unanimously voted against it this year because of the pandemic, said Darlene Jolly, the club president, who added that this was the first time the club canceled its lessons since it started in 2004.

This is only the second year for the club to hold dances at the senior center. For the previous 15 years, they met in the basement of the First Security Bank in Plains, but that ended in 2019 when the bank needed the space, said Jolly, who's been the club president since the club began. Jolly started square dancing in Spokane 42 years ago, when she was in her 40s. She said it was her son who got her interested in it. "I got hooked on it right away. It's like cleaner dancing. Nobody got drunk so you got to know them as they are because they were sober," said Jolly.

The club took COVID-19 precautions Saturday with required masks and none of the usual refreshments, except for bottled water, although social distancing was unavoidable because square dancing requires personal contact. Hand sanitizers were available for disinfecting between dances. Troy resident Marvin Speck served as the caller, alternating the microphone with Lorrie Lane of Kalispell, who was the "cuer" for the round dance numbers. Each played between 15-20 pieces and both have worked with the Plains group several times.

Speck, a caller for more than 30 years, sang portions of the pieces he chose, changing the words of oldies, like "Love Potion No. 9" and "Rhythm of the Rain" to guide the dancers through the movements. Jolly said some callers don't sing, but she added that he does a good job. He used a variety of country music, old rock 'n roll and pop songs. Most had a faster beat than the music Lane picked for round dancing, where dancers paired up and did mostly waltz-style moves and danced in a circle.

Dancers ranged from 40-year-old Marshall Irving of Plains to Jolly, 84, a Paradise resident, and included a dozen women and eight men. "The girls always outnumber the guys - I guess they like to dance more than the guys," said Jolly. Some of the women danced with other women or by themselves. The dance went for two and a half hours with some of the participants showing their footwork in every dance. Few took breaks. There were club members from Plains, Paradise, Thompson Falls, Trout Creek and St. Regis, along with visitors from Kalispell and Libby, and Sandpoint and Priest River, Idaho. A handful belonged to the Libby Spinning Squares, another square dance club. Don Burrell of Thompson Falls is a member of both the Libby and Plains clubs. The Plains club has about 30 members today, but Jolly said she'd like to get a few young members.

Though this was the club's first dance of the year in Plains, it held one in St. Ignatius in September and will have one in Plains on the first Saturday of the month until May, then on the second Saturday of the month in June and September. There are no dances scheduled for July. The next dance will be Saturday, Dec. 5, at 7 p.m. at the senior center. The cost of a dance is $6 a person and $12 annually to join the club. They have a campout in St. Regis planned for the second week of August. The club is sponsoring the Montana State Festival at Ronan High School on Memorial Day in 2021. Those interested in becoming a member can call Darlene Jolly at 826-8951. 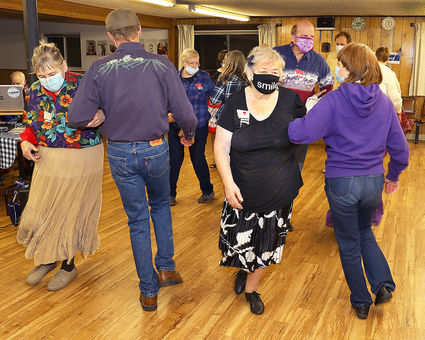 TWISTS & TWIRLS – Darlene Jolly, with the "Smile" mask, takes to the floor for one of the numbers at the Montana Mavericks dance in Plains. On each side of her is Kelly and Kathryn Hawkins of Trout Creek. On the far left is Mary Ann Hart of Plains.

Jolly anticipated a smaller crowd, not because of Covid-19, but due to injuries and surgeries of some of its members. "It's just torture watching them," said Montana Maverick member Terry Watkins of Plains, who had hip surgery in October and although he was getting around nicely, he was told by his doctor, no dancing yet. The 67-year-old Watkins and Jolly are the only two original club members. Watkins' doctor told him he might be able to get back on the dancing floor in about a month, though he still might not be able to perform some of the moves.

Jolly was pleased with the number of attendees Saturday, especially that some traveled from Idaho to take part. She knows of four people who would have showed up had there not been a mask requirement. "It's great fun exercise and a great activity for couples to do together," she said, suggesting that when people try it, they give it at least four sessions. "Historically, you are hooked by then," she said.