Ready for the season 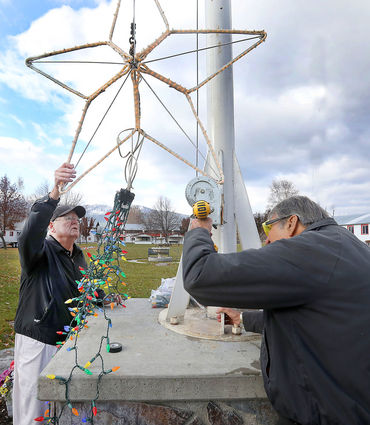 STAR OF THE SHOW – Former fair manager Mike Hashisaki (above left) steadies a star while fairgrounds caretaker Kim McNeil raises it up the flagpole.

The Sanders County Fair Foundation is striving to make the fairgrounds a bit more cheery for Christmas by buying new lights and decorations and getting them in place.

Foundation members and volunteers worked the last two weekends to install the lights on 10 buildings on the grounds, including 20 lighted inflatable decorations. The fair has not had a Christmas light show since Mike Hashisaki retired as fair manager in 2015, but he was back Saturday working with volunteers Kenny Jones, Howard Martin, and Kim McNeil, the fairgrounds caretaker for more than 20 years, on the 60-foot tall flagpole "Christmas tree." Hashisaki ordered more than three dozen strands of new multi-colored mini lights for the tree. With a large 20-year-old plus lighted star at the top, the four men added lights as they raised it up the pole. However, Hashisaki had to order additional lights and plans to have it done Friday.

The Sanders County Fair Commission voted unanimously last year to bring back the fair's Christmas lights, pending the lights' conditions and replacement costs. Some of the decorations were in working conditions, but many were too far gone to be repaired, said Fair Commission Chairman Randy Woods last year. It was the Fair Foundation that donated some $7,000 to purchase new lights. The nonprofit organization ordered 4,000 feet of stringed lights and 4,000 white light bulbs. A portion of the money came as a result of a raffle the fair conducted.

Eighteen volunteers started putting up the lights the previous Saturday, putting in more than seven hours, but an order snafu resulted in them being 3,000 light bulbs short, said Wade Rehbein, president of the Fair Foundation and one of the volunteers putting up the lights. Rehbein and Heidi Kirkwood were the only two Fair Foundation members helping to put up the lights; the rest were volunteers from Plains and Thompson Falls, and the fair manager, Melissa Cady, the previous Saturday. She also worked on the lights during the week. Cady said they plan to get some of the old silhouettes and the Nativity out this week. She said the lights will remain up until New Year's Day.

The crew strung the light strands without the bulbs, ordered additional lights, and individually inserted the bulbs about 12 inches apart the following week. The task took the 13 volunteers, including Trinity Riffle, 14, the only youth participating, nearly four hours to do Saturday. RTI Fabrication donated two man lifts and Studs Building & Home donated one man lift to put up the lights. The decorations included inflatable decorations, which ran from a four-foot minion to a 12-foot tall Grinch. Margaret McNeil, Kim's wife, said they've had a couple inflatable figurines in the past, but people poked holes in them.

It all began when Hashisaki took over as manager. "I was sitting in the kitchen drinking coffee with Mikey one day looking out the window and he said the flagpole would make a good Christmas tree, so we did it, and that's how the whole thing started," said McNeil, who during the Christmas season used to turn the lights on at dusk and off again at 9 p.m. It's a task he won't have to do from now on because Rehbein said they're buying timers to go on and off automatically each night.

Hashisaki created a Christmas light show in 1992 after he retired from the Air Force and kept it going his entire time as manager. Each year, he and McNeil added more lights and figurines. It eventually became a drive-through show and usually had an opening celebration with Santa Claus and goodies. The fair board cited cost and manpower for not having the show any longer, but both reasons were moot with the Foundation paying for the new lights, the volunteers putting up the decorations, and the timers purchased. The only cost will be the electricity, but Rehbein said that with the LED lights, the electric bill will be "next to nothing." 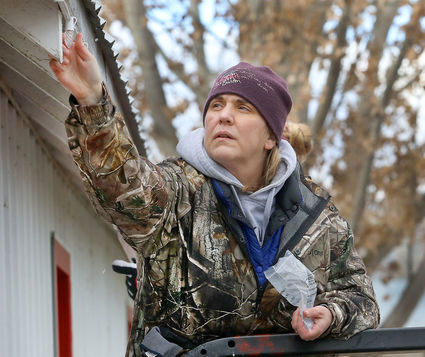 BULB WORK – Volunteer Lori Rehbein inserts a new bulb on a building at the fairgrounds.

The Sanders County Fair Foundation is a nonprofit organization devoted to purchasing items that are not in the fair's normal budget. The Christmas lights came as a result of money made by the Foundation at its beer booth sales at fair time. Rehbein said it won't be as grandiose as before, but he believes more will be added each year. "I think it's going to look great," said Rehbein, the Fair Foundation president for the last four years and a former fair board member. "I like it, but it's really good for the kids," said Rehbein. He added that the show used to attract visitors from in and outside the county. All the white lights on the buildings will remain in place and could be illuminated during fair time.

Hashisaki is pleased that they are going to have the Christmas light show again and looks forward to seeing it all lit up. Cady said the lights will be in operation for the Cancer Network of Sanders County's annual Chinese Lantern Launch fundraiser at the fair's agriculture building Saturday at 6 p.m.