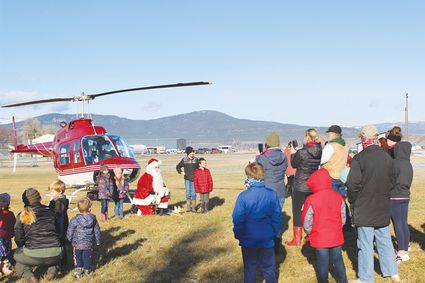 CHILDREN OF ALL AGES gathered at the Plains School football field last Wednesday to greet Santa, who arrived by helicopter as part of the Museum of Mountain Flying's Red Sleighs Over Montana event.

A group of volunteers from Missoula's Museum of Mountain Flying helped spread Christmas cheer across Montana last Wednesday as part of their first Red Sleighs Over Montana event. Fourteen pilots volunteered their planes, helicopters and time to fly Santa to 20 rural communities, including Plains and Thompson Falls, to deliver gifts to children in need this holiday season.

With the initial idea of delivering gifts across the rural towns of Montana, John Haines, with Minuteman Aviation and a volunteer for the event, served as a coordinator to help the idea come together in just 10 days. "It all started last Sunday night," Haines said. "As we were all texting back and forth, I thought to myself, 'ok, this is happening.'" Haines also coordinated with The Ledger to allow us to take a seat on the helicopter as it flew from Plains to Thompson Falls. Volunteers bought and wrapped toys and teddy bears, as well as some requested items that were needed in specific areas, and loaded them on the planes and helicopters to be delivered Wednesday morning. In order to land in Plains, Haines had to contact the superintendent of the high school to get permission for a helicopter to land on the football field; which Haines says wasn't hard to do at all. "It's easy, with can-do people," he stated.

On a Bell Jet Ranger, helicopter pilot and Thompson Falls native Art Dykstra took the reins and made his way from Missoula to the first stop in Plains. With Santa as his co-pilot, Dave Bretz, a Museum of Mountain Flying volunteer, also donated his time for the inaugural event. The helicopter was greeted in Plains by no less than 50 residents, parents and children all excited to meet Santa. The children lined up for photos and the hopes of telling Santa one last time what they were wishing to receive Christmas morning. In order to help pass time (and to keep warm), children could be seen running around and playing tag, as they each anxiously waited for their turn.

After about an hour on the ground in Plains, Santa made his way to his second stop. Going about 100 miles per hour, the helicopter and crew made its way to Thompson Falls in just 15 minutes. While the ride was a little choppy because of the wind, the weather cleared up beautifully from the previous day. Red Sleighs Over Montana was set to take off on Tuesday, December 22, but bad weather caused the event to be postponed to Wednesday. 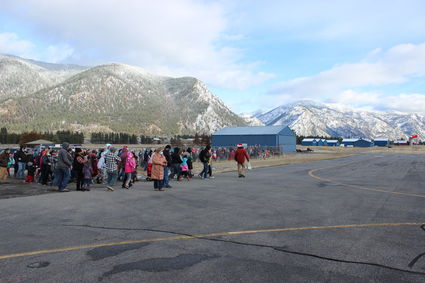 Dykstra, who has been flying for the last 20 years, took a quick tour over town and the Thompson Falls Hydroelectric Dam before landing at the airport. As the helicopter landed, a large crowd of around 100 people made their way to the landing area to greet Santa. Children of all ages ran to the fenced area, jumping up and down and waving as Santa exited the helicopter. Again, children lined up, anxiously awaiting to meet Santa who was handing out candy, before heading home to prepare for Christmas.

The donated gifts were dropped off at the 20 different stops, and were left with local community representatives to hand out to those children most in need during this holiday season. The Museum of Mountain Flying said they had nearly half a dozen boxes of toys that were donated, along with around $6,000 in donated cash. The 12 aircraft departed from Missoula's Minuteman Aviation ramps and headed out to their scheduled destinations, including Plains, Thompson Falls, Libby, Eureka, Choteau, Sunset School in Greenough, Cut Bank, Shelby, Superior, Stevensville, Deer Lodge, White Sulphur Springs, Anaconda, Butte, Drummond, Phillipsburg, Potomac, Seeley Lake and Lincoln.