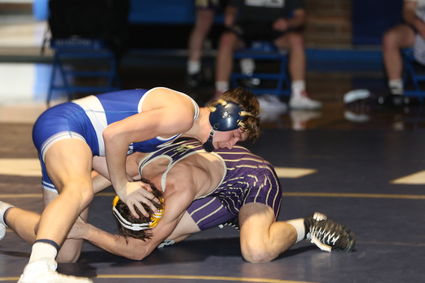 While coach Mike Thilmony and his Hawks hosted Simms and then Cut Bank at the high school gym, the Mission Bulldogs swapped opponents with the Hawks and wrestled Cut Bank and then Simms at the Falls junior high school gym.

The Hawks won their dual with the Simms Tigers grapplers 36-24 but fell to the powerful Cut Bank Wolves 45-28. Scores from the other two duals involving Mission were not available.

Thilmony was glad that his wrestlers were finally able to hit the mat in actual competition after spending the greater part of December wrestling only with each other.

"It was time to compete and I thought these were two pretty good duals to start with," he said. "The kids were excited to be out there, on both sides of the mat."

Now that the wrestling ice has been broken, the Hawks will hit the road for more dual action this week, traveling to Dillon Friday, to Corvallis Saturday (the Hawks will also dual Polson in addition to Corvallis) and to Frenchtown next Tuesday where they will join Anaconda for a triangular dual.

Hannum's pin of Cut Bank's Brock Barcus was of particular importance to the Hawks. "That was a quality win for Max, Barcus is a solid wrestler," coach Thilmony said.

Wrestling at 145, sophomore Elijah Ratliff won by pin against Simms but lost 5-3 to Cut Bank's Matthew Larson in perhaps the most competitive match of the day.

"Larson is a very good wrestler and he got the takedown he needed late in the match," coach Thilmony said. "Elijah will probably see him again, we will try to make adjustments and see what happens next time."

Freshman Walker Morefield (138) and senior Dane Chojnacky (182) both wrestled well. Chojnacky's physical confrontation with Cut Bank's Austin Vanek ended up going Vanek's way but not for a lack of effort by Chojnacky.

"Dane competed very well in that match," Thilmony offered. "Cut Bank is just a very good team across the board.

"I was impressed with them," he offered, "but I was also impressed with our kids. We came out ready to compete and put on a good show. I am proud of our effort."