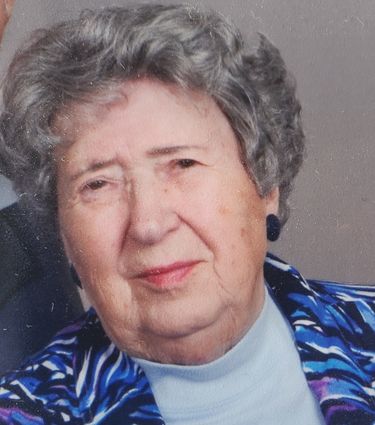 Shirley Anderson, born Shirley Ann Denter on April 5, 1925, to Max and Ruby Denter, died peacefully after bidding farewell to her family, on Wednesday, January 6, of complications from a hip fracture.

Shirley grew up in the mountains of Colorado. After spending the war years in Hanford, Washington, she returned home temporarily to run the family cafe and single gas pump in Big Thompson Canyon. There she met Bob, who had served in the USMC as a fighter pilot in the Pacific theatre, when he and his fishing buddies pulled up for gas and "all the steak you can eat." Shirley cooked, and by the end of the meal Bob had somewhat proposed. He needed a few weeks to think about it. Shirley advised him that if he thought too much she might be gone. Three weeks later they were married.

When Bob signed on with the U.S. surveying crew working in Montana, the new couple said goodbye to their families and headed for Big Sky Country. They lived in a small cabin on Rattlesnake Creek in Missoula where their two oldest children, Karen and Nels, were born. While Bob traveled, Shirley was isolated with two babies, pregnant with the third, and missing her family. She strongly encouraged her husband to take an offer of a partnership with her brother-in-law, Ted Andersen, in a Firestone store in Enumclaw, Washington. There the last baby, Kristin, was born.

After five years, Bob joined the U. S. Gypsum Company in Pilot Rock, Oregon. Karen and Nels started school in the two-story old schoolhouse, and Kris was home with mom. Shirley had a giant garden, fruit trees, canning and cooking and laundry - but she also had a plan. When Kris was old enough, she would go back to college and get her teaching degree. It took a while, but she succeeded.

Bob had been asked by his father, who started Silver State Laundry and Dry Cleaning in Denver, to take his place. The move opened up some amazing opportunities for Shirley. She started taking night classes at CU in Boulder. By the time her youngest was in junior high Shirley had graduated with a teaching degree. She taught fifth/sixth grade for 20 years inspiring many students retiring with recognition and appreciation. Bob and Shirley moved back to Montana in 1982 completing a circle of love and living.

Shirley loved her family unconditionally and was a constant inspiration. While "retired," she created a park out of an empty lot in St. Regis that is enjoyed by the community to this day. She also led a major effort to develop a neighborhood plan for the Helena Flats area, where she and Bob maintained a home that remains in the family. Her courage, determination, and unwavering commitments to her husband, family, church, community, and action have enriched our lives. She was truly a "force of nature."

Throughout their married lives, one thread remained essential. One of Bob's two "requests" for their marriage was that she be educated and baptized in the Lutheran church. The other was that she learned to make lutefisk for an annual Christmas Eve dinner. She successfully fulfilled both. Their church family has always been incredibly important to them. For 30 years they have been beloved members of Bethlehem Lutheran Church in Kalispell. For the last five years they have enjoyed living in their own apartment at Immanuel Lutheran's Buffalo Hills Terrace. Bob was 98 in November and Shirley celebrated her 95th birthday in April. They also enjoyed a Zoom celebration of the 73rd wedding anniversary in September.

Shirley is survived by her loving husband Bob Anderson, children Karen Mercaldo, Nels Anderson, Kris Anderson (Sharon Pound); grandchildren Dominic Mercaldo, (Laura) Gianna DiGiovanni, (Craig) Nate Anderson, Kelsey Carson; and great-grandchildren Indiana and Sage Mercaldo, and another great-granddaughter on the way. Countless nieces and nephews across the country will be missing their last, living aunt. Kris and Sharon's godchildren and their parents, the Brian and Courtney Burky family, have also been adopted by Bob and Shirley as their own, along with many in the congregation of Bethlehem Lutheran.

A memorial will be held when it's safe to do so. We are grateful to have lived our lives under the influence of such an amazing, passionate woman. She will live in all our hearts forever. Before she passed on, she told Kris she could see herself cuddling into a huge, fluffy white cloud, floating around with a great joy and a tremendous peace. Godspeed Mom.