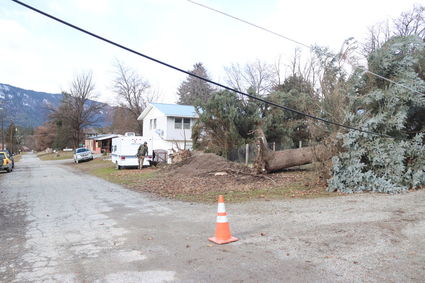 A FALLEN TREE holds down a power line on Ogden Avenue in Thompson Falls Thursday. Dozens of trees fell throughout Sanders County during a windstorm last Wednesday.

Sanders County continues to recover from a severe windstorm that swept through the area last week, leaving downed trees, damaged buildings and residents without power for days. The storm last Wednesday created record wind speeds of over 125 miles per hour, recorded by the National Weather Service at Mount Sentinel in Missoula. In Noxon, gusts of over 70 miles per hours were recorded.

For several hours, according to first responders, nearly 75% of the county was without power from trees over power lines. In his 22 years of experience, Thompson Falls Police Chief Chris Nichols said that was "the most trees I have seen come down from one storm." The police were out checking on residents and blocking off areas where lines were down. Many of them worked long hours between Wednesday and Friday. "The priority for the police department was to check on houses to make sure people were safe and to mark power lines," said Nichols. The chief said this should remind locals to keep an eye on their trees and to take care of dangerous ones. He also added that it may be a good idea to keep the camping stuff within reach and to purchase a generator if a person has a well water system. Chief Nichols also wanted to thank all the people who came out and helped clear the roads, safely.

One place that got hit hard was the Thompson River Animal Care Shelter (TRACS). The shelter saw nearly a dozen trees go down within their facility. "It was the weirdest windstorm I think most of us have ever seen," said Wanda Thorpe, the operational manager of TRACS. Del Smith, the maintenance manager and an animal caregiver, was working at TRACS at the time. He and several other workers and volunteers at the nonprofit witnessed many of the trees come down and were almost struck several times. "They were like little microbursts of wind," said Smith, recalling how the wind would blow and then stop and then blow again. The wind knocked a few trees down and, as Smith and others were out working, more trees were knocked down from the subsequent bursts. Smith says that this happened for a good portion of the morning and into the afternoon, so much so that they tried to take shelter in the buildings to wait it out several times thinking that it was over just to see another gust come through.

The animal shelter sustained a lot of damage to their fencing, which Smith says is a necessity for the facility, because they use the yard for walks. "The biggest worry is (the dogs) getting out of the yard," said Smith. There are two or three places in the perimeter fence damaged severely, however, the worst damage to TRACS was to the puppy den. The small building had a large tree land on the roof and damaged it so badly that a large portion will need to be replaced. The tree sent branches through the ceiling and destroyed a window in a storage room under it. Thankfully, Smith said, the puppies are housed in the adjacent room, protected by a wall. Smith says that the shelter will need a lot of work done and the expense will be high. Smith asks that anyone wanting to volunteer to help call the animal shelter. Smith says that nearly everything the place makes is from donations, so any help is appreciated.

The City of Thompson Falls will face another two to three weeks of cleanup from the storm, said Public Works Director Neil Harnett. "It was pretty scary watching some of these big trees fall," said Harnett. Having worked with the city since 1993, Harnett said that he has never seen anything this damaging come through the town. According to Harnett, much of the upper part of town was hit pretty severely, and Broad Street saw some of the biggest trees in the area go down. Harnett said he was happy to see a couple groups out helping. "Living in a small community, people still have a good core and work to keep people safe and help out," said Harnett. He also wanted to express a special thanks to the contractors who dropped everything to come out to help the city.

Plains was also hit hard by the storm, with the golf course losing several large trees. Ben Bewick, an attendant at the Plains Transfer Site next to the golf course, said they heard the trees go down and because the big trees at the dump were swaying so much, they considered closing for the day, however, did not. The largest was about 35 feet from the building. The biggest was nearly 100 feet tall and left a 9-foot wide hole that was four feet deep. 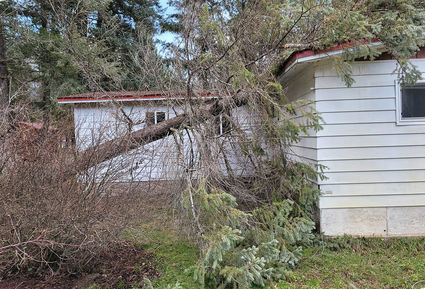 The puppy kennel at TRACS in Thompson Falls was damaged by a falling tree.

"We were fortunate that nothing hit the buildings and we'll be able to open up for business in April," said Gary Revier, a golf course board member who surveyed the damage Thursday. He said they have never had that kind of damage at the golf course before. The golf course property is owned by the Town of Plains, but Revier said the golf course board will get the trees removed. He said they received permission from Mayor Dan Rowan to sell the lumber and put the funds back into the course. At River's Bend Golf Course in Thompson Falls, trees clipped the edge of the clubhouse building.

NorthWestern Energy and Northern Lights crews worked for days restoring power to residents. While much of Thompson Falls was back in service Friday, residents on Blue Slide Road did not get power until Sunday. The Vermilion Point neighborhood outside of Trout Creek was also hit hard. Several trees toppled in the storm, some hitting houses.