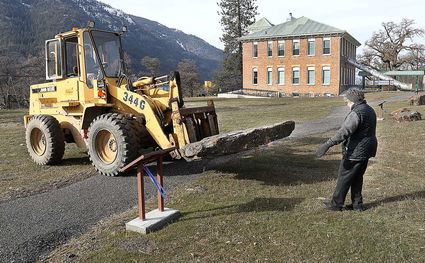 One Paradise resident showed his commitment to the Paradise Center with rocks - big and heavy rocks.

Bridger Bischoff, owner of Rock Solid, Inc., used his front loader last Thursday to haul five boulders, from his "stone yard" a few hundred yards away and placed them in various spots along the center's 1,100-foot paved Paradise Center Walking Trail. The walking trail is comprised of 15 interpretive panels that cover the history of Paradise, as well as other facets of northwest Montana. Judy Stamm, president of the Paradise Elementary School Preservation Committee, selected the boulders in September and showed Bischoff last week where to place them along the trail.

"The boulders add another dimension to the walking trail by drawing attention to the trail itself and they give a close up view of the rocks that make up the mountains behind the center," said Stamm, who said they are going to legally change the name of the nonprofit group, now called the Paradise Elementary School Preservation Committee, to just the Paradise Center.

The landscaping rocks weighed between 350 pounds to an 8,000-pound granite boulder. It took less than an hour for Bischoff to retrieve and place the rocks. "It's so generous of him to do this," said Stamm. "The center couldn't have paid for something like this." She said the boulders give both an esthetic and educational asset to the walking trail. "Bridger has been supportive of our efforts to transform an outdoor space that has been a school playground to a space that can be used by the community and visitors to the Paradise Center," said Stamm.

It was the preservation committee that managed the former school after it closed down in 2013. Three years later, the group turned the facility into a combination community center, arts center, visitor center, and a museum that highlights the history of the area. It is also used as a venue for performances, educational classes, and meetings for organizations. The property is owned by Sanders County, but the county leases it to the committee for one dollar a year. However, it's the committee that has been responsible for raising funds to keep the center going. The center has relied on volunteers, grants and donations for the many upgrades and repairs.

Stamm said Bischoff's boulders would give a close-up look and feel of the type of the area's geology. Bischoff sponsored one of the walking trails' 16x24-inch panels that gives an understanding about the geology in the region. Bischoff is also working on a brief verbal summary for the geology station. Each station will feature a QR Code, which enables a person to use their smart phone to listen to an oral presentation concerning that subject. Stamm's daughter, Elisa Stamm, a silverculturist with the U.S. Forest Service, took the photographs for the Flora of Northwest Montana and did the QR Code oral briefing for that station. Two of the smaller rocks last week were placed at the flora panel, where several native plants will be placed.

The walking trail was established last year and encircles the playground and the old schoolhouse. The panels are especially good for visitors when the Paradise Center is closed, which has been the case lately due to the coronavirus. Stamm hopes the center will be open sometime this spring or summer, but it depends on Covid numbers.

Stamm is not sure of how many more rocks will be hauled in, but said that Bischoff will also be donating a group of rocks that will be placed at the end of the lower parking lot and he offered to line the sides of the asphalt trail with flat rocks to make the trail more defined. He also might be putting rocks near the school's old fire escape and by the center's sign at the bottom of the hill.

"We are so thankful for Bridger's generosity in donating the rocks and placing them. There have been many people who have donated their time, talents and dollars to preserve and improve the Paradise Center. We have exciting plans for the future and we wouldn't be where we are now without all of the people who have stepped up to help make that vision a reality," said Stamm.

The next big project for the center is replacing the aged boiler located in the main building. Karen Thorson, a member of preservation committee, said they are hoping to get the 1930s era boiler replaced with a new heating system. Thorson applied for a $120,000 grant from the M.J.  Murdock Charitable Trust out of Vancouver, Washington. Last year, they received an estimate of $17,500 from a Missoula contractor to remove the boiler. Northwest Energy already donated $5,000 toward the boiler replacement and Blackfoot Communications pledged $2,500 to the project.

In addition, they plan to form a "bicycle fence" along a 150-foot metal structure between the upper and lower parking lots. Four vintage bikes have already been donated to the center for the fence, but Don Stamm, Judy's husband, said they'd like to get around 50 "vintage bikes with character." They plan to weld the bikes to the steel structure. Stamm said he'd pick up any donated bikes for the fence.