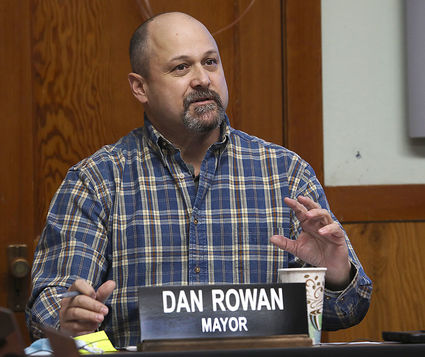 For the second month in a row, the Plains Town Council passed a resolution relating to property it needs for its proposed sewage treatment plant and might have to resort to eminent domain to get it.

The five town council members voted unanimously last Monday evening to approve Resolution 21-3, which makes a final offer to the Stonebrook Trust for the acquisition of a stretch of property for the planned sewage plant. As in the case of Resolution No. 21-1, which was approved in January to purchase the 10 acres for the proposed sewage lagoon, if the owner doesn’t accept the offer, the town would have to pursue the endeavor through eminent domain, said Mayor Dan Rowan.

In Resolution 21-3, the town is offering $21,600 for a stretch of land from the Stonebrook Trust, which owns farmland in the same vicinity. Unlike the purchasing of land from Nick and Erika Lawyer for the treatment plant, the Stonebrook Trust property is merely an agreement to use a stretch of land so the town could put in a gravel road to get to the future treatment plant. The property is located off Helterline Road. The town would be responsible for building a road on the property and maintaining it. In addition, the owner would also have full access to use the road.

The Stonebrook Trust consists of three Stonebrook family members who reside in Oregon. “We had what I would consider fair negotiations or negotiations that were making progress until just recently and communication has been completely cut off — no answers to text, no answers to emails,” Rowan said at the council meeting. “At some point, we’re going to have to make the assumption that if they don’t answer your communication efforts that the answer is no,” he added.

The approved final offer went out in the mail Feb. 2. Rowan said they would wait until Friday (Feb. 12) at 5 p.m. to proceed with any type of condemnation process. “Someone has interjected themselves into the negations between the town and the Stonebrook Trust,” said Rowan, who added the easement is vital to the town’s plans.

“The town strongly prefers to obtain the property interests through a negotiated purchase rather than condemnation,” he said. The mayor said they had hoped to start the $6.4-million project in the spring and be finished by winter. In addition, they planned to get one treatment cell completed for emergency purposes in case the Clark Fork River breaches the present lagoon this year.

Paperwork for the eminent domain action against the Lawyers was sent to 20th Judicial District Court in Polson Jan. 19. “It’s in the court’s hands now. “We did paperwork to expedite it, but now we’re just waiting,” said Rowan.

The sewage treatment plant was established in 1983 at the end of Helterline Road. It has five lagoons, an ultra violet treatment and a lift station. According to documentation sent to the Honorable Deborah Kim Christopher of the 20th Judicial District, in the last 25 years the Clark Fork River has claimed 240 feet of the riverbank at the treatment plant. “If the facility is breached, the town has no alternative means to treat the 100,000 gallons of sewage generated daily,” the document states. It also noted that if breached, an estimated five million gallons of treated or partially treated sewage would be released into the river and would create “a serious health and environmental crisis.”

Also at the council meeting, Rowan said he would be reappointing Plains Officer Jarod Hutchings for another 30 days. Hutchings is a former deputy with the Sanders County Sheriff’s Office. There were four applicants for the opening left by Plains Officer Ethan Harvey, who left last year to be with the sheriff’s office. The applicants will soon be going through an interview process, but Hutchings is the only one with law enforcement background. Rowan hopes to have a full time permanent officer by March.

The mayor wanted to give the Public Works Department crew a pat on the back for their work recently to repair a service line water leak behind the Dew Duck Inn. It took the three men — Greg Dicken, Greg Welty, and newly hired Jimmy Sirucek — 10 hours to fix the problem. “It was cold and wet down there. The public works guys sometimes don’t get a lot of credit, but they went the extra mile that night for sure,” said Rowan. The mayor also noted that the town pumped 3,709,000 gallons of water last month, but sold only 2,163,500 for a loss of 41.67 percent to leakage. He said the service line break the men worked on accounted for some of the water loss, but he said there is a leak or leaks elsewhere in town, but they don’t know where.

In lieu of the recent windstorm that left the town without power for 10 hours, Rowan is looking into purchasing storage tanks to hold 500 gallons of diesel fuel. He said the town’s generators kept the water and sewer operations going during the storm, but he is concerned that had the town gone with no power for days, as Thompson Falls did, he’s unsure if the town would have had enough fuel to keep the generators going, especially since the two gas stations had no power. The next town council meeting is scheduled for Monday, March 1, at 7 p.m.