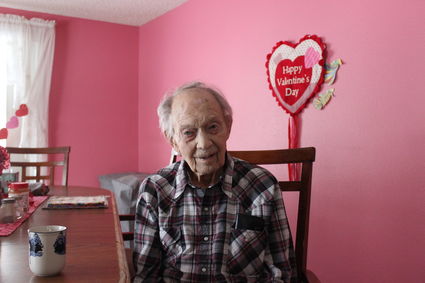 According to the demographers at the U.S. Census Bureau, in 2020 there were over 90,000 centenarians on record. Julian Lofthus, a resident at Cherry Hill Assisted Living in Thompson Falls, has now joined the elite group. "I don't really feel like I'm that old," Lofthus said. "But I don't feel like I did when I was in my teens." While Lofthus said it is harder to get around these days, he's in no hurry. "I'll get there sooner or later," he chuckled.

Born on January 5, 1921, Lofthus celebrated his one hundredth birthday with his nephew and other members of the facility, opening gifts and eating birthday cake. Born in Minnesota, he grew up in Choteau, Montana, helping on his family's ranch. "Those were the good old days," he mentioned. "It was a big family, never a dull moment." His parents spoke Norwegian in the household as Lofthus was growing up, and he learned to speak the language along the way. Naturally, he is now fluent in the language, and says his prayers in Norwegian every night.

His parents were dairy farmers, and he remembers milking the cows by hand, the rest of the time was spent running around playing games with his siblings. He grew up with six brothers and four sisters. As he grew older, Lofthus recalled a Harley-Davidson motorcycle he would ride around on. "It was a dull green color," he recollected. "It needed a paint job. It was nothing fancy, but it was still fun." During World War II, Lofthus was enlisted in the army as a radio operator in the Pacific Islands. The veteran said he didn't witness too many bombings during his time. "Must have missed them," he said. After the war, Lofthus came back to Montana to continue farming. He lived all around the state before settling in Thompson Falls.

Lofthus has been a resident at Cherry Hill Assisted Living for the last 10 years, and is described by the staff as an absolute day brightener with a wonderful sense of humor. He spends his time walking around the block and napping on the swing in front of the property. When asked if he had any advice on life for younger generations, he said, "Don't take any of the wooden nickels."