Hawks are ready for tournament season 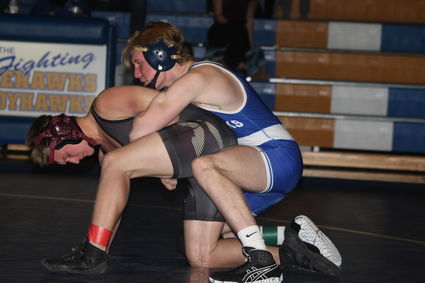 High school wrestling is all about finding your perfect weight for competing, and working to be the best you can be at that particular poundage.

Doing their best to perfect their bodies and techniques as the season rapidly winds down, Thompson Falls wrestlers stayed busy again last week, winning 32-6 over Mission-Charlo in Mission last Tuesday, defeating Fairfield (30-24) and losing to Whitehall (54-14) in Whitehall Friday and finishing up the week with dual wins over Cascade (33-21) and Fort Benton (37-24) in Cascade Saturday.

The Hawks will complete regular season action this week with another pair of dual-match days, hosting Clark Fork and Eureka Friday, and going at it with Ronan and Polson in Eureka Saturday.

Coach Mike Thilmony says fans could be treated to a rare prize Friday in the dual match with Eureka. In that dual, Eureka's Gunnar Smith, a senior and a three-time State B-C champion, is expected to wrestle Thompson Falls' Trae Thilmony, a junior who won the State B-C crown at 120 pounds last winter and placed third at 113 the year before.

Both are wrestling at 132 pounds this season and coach Thilmony says the match will be a vital one for seeding into the Western B-C divisional meet in Cut Bank February 26-27. And the two do have a history against each other. In the 2019-2020 season Smith edged out Trae 5-4 in the Polson Invitational championship match, but a few weeks later, Trae scored a dominating 11-5 win over Smith in a match at Mission.

"Fans might be interested in seeing this match," coach Thilmony said. "It will probably be a very good one to watch."

Outside of his son's big upcoming match, coach Thilmony said he is proud of the way his team has come together this COVID-19-impacted season.

"We thought the dual format we were forced to use this season would be detrimental," he said. "But it has actually been kind of the opposite; it seems like we have built up our team camaraderie, like everyone has each other's back."

In the duals last week, starting with Mission-Charlo, Shane Reishus highlighted the Hawks' efforts there with an 11-8 decision win over Mission's Canyon Sargent at 152 pounds. Elijah Ratliff (over Charlie Adams at 145), Max Hannum (Chris Smith at 170) and Dane Chojnacky (Diego Hostetler at 182) all won their head-to-head matches by pin.

In the dual with Whitehall, Trae Thilmony defeated Dawson Powers 17-2 by tech fall early in the third period at 132 and Ratliff scored an important 7-0 win over Whitehall's Trenton Walker at 145. Thilmony had defeated Powers in a tense quarterfinal match at 120 in the 2020 State B-C meet by pin late, but had led only 10-8 before finally turning and pinning Powers in that match.

Against Cascade the next day, Brown lost his match 11-9 to his Badger opponent but gained a lot of respect from his coach. "Westin broke his nose like 10 seconds into that match," Thilmony said. "A lot of kids would have been done and would've taken themselves out, but Westin fought through it."

Otherwise, Trae Thilmony, Ratliff, Fersntrum, Hannum and Chojnacky all won by pin against their Cascade opponents.

In the dual with Fort Benton, Ratliff and Chojnacky won by pin, Hannum won a 13-2 major decision and Fernstrum out-pointed his Longhorn foe 11-10 at 152.