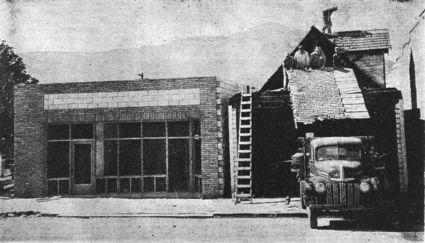 NEW BUILDING FOR THE LEDGER –The present-day location of The Ledger (left) was built in 1957. In this photo, the old building is being torn down. Doc Eggensperger noted, "Frankly we're excited about the prospects of moving into a new building that can be kept clean, will have sufficient room and one which can be kept warm in the winter."

The Sanders County Ledger, with this issue, celebrates its 11th birthday, entering upon the 12th year of its existence. Established in 1905, the first issue made its appearance on February 24. J.T. Spencer, its founder, was also publisher, manager, superintendent, foreman and editor-in-chief, and for about five years Mr. Spencer conducted the paper and did it well.

In January, 1910, the paper was sold to E.H. Rathbone, who ran the plant about a year, when in January, 1911, it was taken over by the present management.

As it has strived to do in the past and will continue likewise in the future, The Ledger will endeavor to give the people of Sanders County news which is news. It will assist to the best of its ability in building up the county, to promote the development of the county's many resources and lend its aid to the progress of public enterprise.

First, last and all the time, this paper will be for the best interests of the people living within Sanders County.

THE LEDGER IS SOLD

A SHORT HISTORY OF ITS PAST

When did the Sanders County Independent Ledger have its beginning? According to record, the paper known by this name was established in 1905.

But there were papers here in Thompson Falls, off and on, long before that – as long as old-timers can remember. Mrs. Elda Hougland has preserved a 1911 issue of The Ledger and in it is a column, "Thompson Falls Seventeen Years Ago." The first paper ever published in this city, we conclude then, was in 1894, "The Montanian."

We noted that in 1911 this was the official paper of Sanders County. Ray S. Conger was manager and A.W. Thayer, editor.

Among one of the interesting items in that 1911 issue was the First State Bank building was being constructed.

Going back to the early 1900s we found that this county was created after the meeting of the legislature in 1905. Thompson Falls was designated the county seat. The paper was located where the jewelry store now stands (now Courtney's Floral Creations).

Mr. Dorris recalls that later, while Conger and Thayer were here the print shop and newspaper plant was located either in the old theatre building which burned or very near to it. The old theatre building referred to was about where the liquor store now is. Everything that could be salvaged plus the name, were moved to the old laundry building located on lots in back of the old Ward Hotel, now the Black Bear Hotel. First Security Bank now occupies the site.

Purchase of The Ledger by S.J. Vas Binder occurred in the fall of 1920. At the time the Vas Binders purchased The Ledger, it was located in the aforesaid building behind the Black Bear (Ward) Hotel, overlooking the river and westerly bank which was then free of buildings. It was a well equipped plant, much larger in floor layout and facilities than the present quarters. A huge plate glass window provided a spectacular view of the dam and mountains in the background, a real inspiration to the new editor and his family who had just migrated from the somewhat desolate prairie land of northeastern Montana.

A mid-afternoon fire of unknown origin broke out about two years after Sam Vas Binder had taken over The Ledger property, which entirely destroyed the building, the old paper files and most of the plant equipment.

The Ledger was then set up and published at its present location on Main Street. At that time, The Ledger office was a wooden one-story building situated where Little Bitterroot Thrift Store now is.

When Mr. Vas Binder's death occurred in 1931, Mrs. Vas Binder carried on as editor and publisher for several months. She was then joined in 1932 by her son, Willis, who assumed the major responsibilities of editing and publishing.

During his short business life, Willis G. Dunlap built up an enviable reputation as an original writer. His editorials were followed by editors of big papers and magazines. His "Hit or Miss" column expressed his true feelings and The Ledger was read far and near by a great many. With his sudden passing in December, 1947, the Sanders County Ledger lost "that something." Willis left a wife and two children. His widow, Irene stepped in to carry on the publishing and editing until August 15, 1953 when Mr. K.A. "Doc" Eggensperger purchased the business building and plant from her.