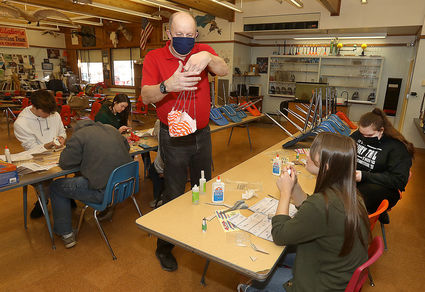 None of the Plains High School physics students plan to become rocket scientists, but their teacher hopes building rockets will help get them through the class with higher grades.

Carl Benson has been teaching physics for 30 years and saw his students' grades go up after he introduced a hands-on rocket segment. The class is an elective and primarily for seniors, but it's a difficult class, said Benson, who noticed that after he introduced rocket building, more students signed up for the class. But the teacher has an ulterior motive - he has fun, too. The students build a rocket from a hobby kit, then go outside and launch them. More than once Benson has built his own rocket, though he makes sure his are bigger than the standard kits the students get. He has one with two space shuttles attached this year. When the rocket reaches a certain height, the shuttles break free and glide to the ground.

"This part is about momentum and energy and this reinforces those concepts," said Benson. The project helps them understand the mathematical equation lesson and it's fun for the students. "It's a nice break from equations and calculus," said 17-year-old Duncan Chisholm, one of six students in this year's class. It's one of the smallest physics classes Benson has taught since starting the rocket project. The other students include: Katrina Hagerman, 17, Skylar Bergstrom, 18, Nicolas Gumm, 17, Nathan Feliksa, 18, and Chloe French, 17. French's brother, Charles, was a guest speaker in the class on Monday, talking about his experiences as a production engineer at Boeing, where he worked for over six years before moving back to Plains last year. Charles French received a mechanical engineer degree from Montana State University.

The students began working on their rocket projects last Wednesday and will be finished sometime this week. It usually takes three or four 55-minute classes to complete their projects, which includes 11 parts and the choice of one of three engines. "They always go for the bigger one; they want more power," said Benson.

Last year was the first year the students had a choice of using either prefabricated plastic fins or balsa wood fins, which had to be glued on individually, but Benson went back to just the balsa fins this year. "It makes the kids work on measuring angles and sanding surfaces, so there is a greater chance of affecting how the rockets fly," said Benson. Inserting the plastic parachute and attaching the fins are the two most critical aspects of assembling the rocket. The fins need to be positioned in the right place to get a good flight pattern. The students can attach the balsa fins three different ways, although Benson doesn't recommend putting them upside down. A student tried it a few years ago. It went up 30-40 feet, then went horizontal. He said the fins have to be solidly attached, positioned straight and be the same distance apart or they will cause the rocket to "corkscrew" and not reach a high altitude.

Gumm spent a lot of time the first day sanding his three fins to make them as thin as possible in hopes of making his rocket faster. Benson said fins that are too thin could also make the rocket unstable. Feliksa decided to do something different by gluing three additional fins, each an inch-long, to the upper part of the fuselage just below the nose cone. "It's going to help go really straight or it'll slow it down," said Feliksa, who has named his rocket the "Shark." Gumm named his the "Beast" and Hagerman is going with "Norbert," the same name she gave her egg for Benson's Egg Drop class, although she dropped and broke Norbert the egg before getting it into her custom made protective contraption. Bergstrom isn't going to name her rocket, but plans to paint flames on the fuselage. 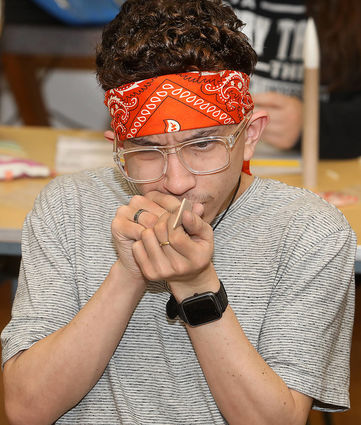 THINNER BETTER? – Plains High School Senior Nicolas Gumm looks to see if his rocket fin is thin enough for attaching to the fuselage.

The project won't be all fun. They have to keep meticulous records of their work and have to handle problem solving lessons with math, algebra and precalculus. They are taught the concepts of impulse and velocity and learn that for every action there is an opposite reaction. And in the end, they take a written test. Benson said the project gives them a practical understanding of what they study in the classroom and he believes the hands-on application helps them make a connection. He said some of his students have gone onto careers in aviation because of his class. Two became Air Force jet pilots and one worked for NASA.

This is the second year students will be able to utilize mobile altimeters to measure the rockets' assent during the launch, but they still have to use a mathematical equation to get the answer. Part of the program will be a field trip to the Plains airport, where Randy Garrison will go over some of the aerodynamics on his own Cherokee Piper and offer the students a flight over Plains. Garrison has been giving the students the complimentary plane ride for several years and said the majority of them had never flown. The students will be launching their rockets in the next week or two, depending on weather conditions. Benson said he looks for a day that has very little wind to avoid misdirection of the rockets.