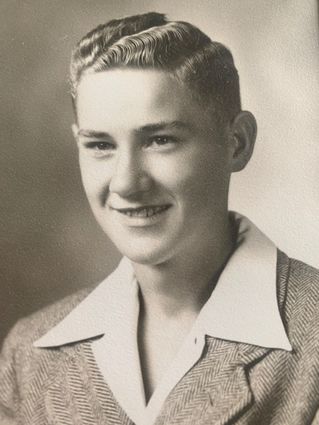 Ferrel Henry Hanks, 90, of Whitepine, Montana, was called home to the Lord on January 3, 2021, at Clark Fork Valley Hospital in Plains, Montana.

Ferrel was born December 15, 1930 in Jamestown, North Dakota, to Ferrel and Mary Hanks. In 1933 he was joined by a brother, Dean. The Hanks family moved to Billings in 1946 and Ferrel graduated from Billings Senior High School in 1948. It was at this time he met the love of his life, Cecelia Helen Achten. On December 15, 1950 they were married in Billings. In June 1951, during the Korean War, he enlisted in the Air Force in Butte. During his time in the service, he was an instructor in teletype and cryptograph while also repairing equipment. He was honorably discharged in June 1955 at the rank of Staff Sergeant. Ferrel was never one to be idle and amongst other endeavors, he worked in both the grocery and dairy business after his time in the military. He also raised sheep for many years.

In 1977, Ferrel, his family and the sheep, moved to Whitepine. Ferrel was a man of faith and became an active member of St. William Catholic Church. In 1985, Ferrel and his son, Ron, started a dairy distribution business. He was active in this business until his retirement at which time Ferrel and Cecelia did some traveling in their travel trailer before settling on his beloved ranch.

Ferrel's family life was richly blessed; he and Cecelia had four children, Rick, Ron, Russ and Ruth. Then several grandchildren came along – Amy, Mark, Mara, Reagan and Veronica, each as an additional blessing and source of great joy and laughter for Ferrel. Years later, great-grandchildren would keep Ferrel on his toes and a smile on his face. There were also numerous others that considered Ferrel "Grandpa" and he loved them as if they were his grandchildren (Tony, Paul, Zoe, just to name a few).

Private funeral services were held January 20, 2021 at St. William Catholic Church with Father Jeff Benusa officiating. Burial was at the Whitepine Cemetery under the auspices of VFW Post #3596. Arrangements were under the direction of the Sunset Hills Funeral Home of Plains, Montana.