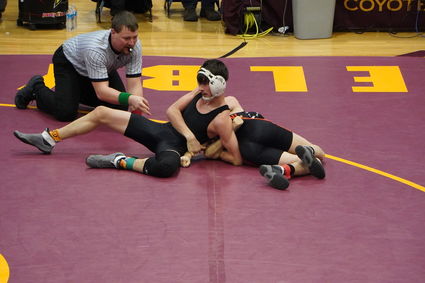 All in all a pretty good season for Plains-Hot Springs wrestling.

Besides the Carey brothers, the Schultze clan – brothers Jacob (at 120), Stephen (126) and David (132) – also all competed in Shelby but did not quite advance to the medal round, although two of them did come close. "David and Jacob were one win away from the medal round," Angle said. 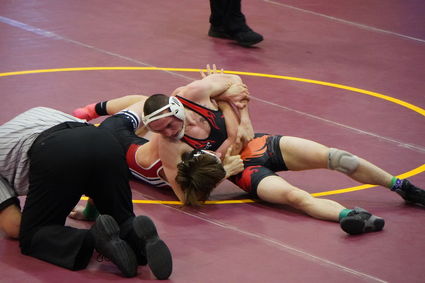 FANTASTIC FINISH - Plains senior Peter Carey won fourth place at 126 pounds in the State B-C meet in Shelby last weekend. Carey had won fifth place in his weight class at the Western B-C meet in Cut Bank the week before.

Angle appreciated what his wrestlers – including the four girls who wrestled in Montana first-ever Girls All-Class tournament three weeks ago and also won two medals there – gave him this COVID-19 affected season.

"It was a good year with the hand we were dealt," he said. "We did the best we could and that is all I can ask as a coach. Very proud across the board for our wrestlers."

Angle thought the Savage Horsemen may have done a little better than they showed last week. "I wish we could have pushed a few through to the final rounds but hey... this is the state tournament and we are wrestling the best competition in Montana. So coming home with two placers is pretty good in my book."

Looking ahead, Angle is optimistic about the future of P-HS wrestling.

"On the whole, we were graced with a good group of kids this year boys and girls," he said. "We did a lot of growing, improved a lot. Now we just want to keep it going next year."