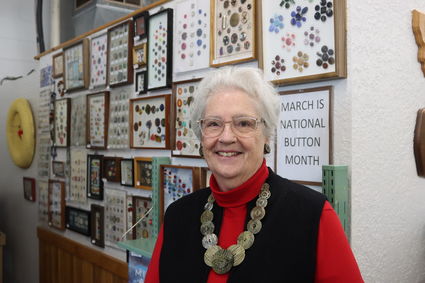 Every month the library features an artist or hobbyist by displaying their work. For the month of March, which also happens to be national button month, Willina Lueb was chosen to feature her button collection and to talk about the hobby. "It's similar to coin and stamp collecting," said Lueb, "there are just so many areas of interest that one could go." Lueb explained that the hobby has been around a long time, and the National Button Society was established in 1938.

Lueb, from Thompson Falls, has been collecting since she was a child but stopped collecting for a few years after she entered high school. She picked it up again in the 90s when her parents moved out of their home. Lueb says that she got a hold of a lot of her mother's old buttons and said that the passion for the hobby came flooding back. "Most people who started have a story of sorting through their grandmother's button box," said Lueb. Her mother loved to sew, and did so through the 1930s, when Lueb explained that some of the most interesting buttons were coming out. In her childhood, Lueb remembers seeing buttons on cards in the sunroom windows of a neighbor down the street. She said these fascinated her.

Lueb eventually joined competitions, where participants would create themed collections or interesting button displays. "I just do it for the challenge of paying attention to more detail about the buttons," said Lueb, explaining that as she learns more about the buttons, she learns more about history. She loves to learn details like how the buttons were made or even who made them. One small collection of buttons she spoke about were buttons manufactured by the Colt arms company. She explained that Colt also produced buttons sometime between 1930 and 1950, along with their famous line of firearms. She also spoke about her growing collection of Montana-made buttons, and how she is always trying to inspire local artists to create buttons. 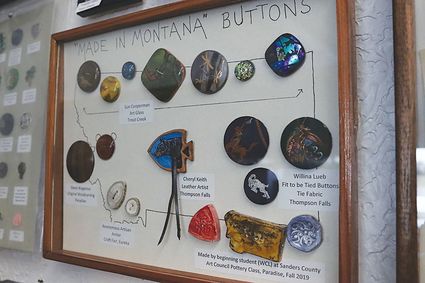 A SPECIAL PART of Lueb's button collection includes some made in Montana.

Lueb participated last year in the library's monthly artists showings, however, only had her display up for a couple of weeks. This year, Lueb will have her display up for the entire month of March, and will be in the library to talk about it with onlookers Tuesdays through Fridays, 1-4 p.m. During her time in the library, she will be available to talk about the various organizations for button collecting, as well as to hand out flyers for people interested in joining. "It's a great opportunity to meet people," said Lueb. According to her, there is no Montana state button society, however, there is a very active one in Idaho. She will be handing out flyers for the Idaho State Button Society as well. When asked how many buttons she has in her collections, she said "I wouldn't even hazard a guess, but more than I can count."