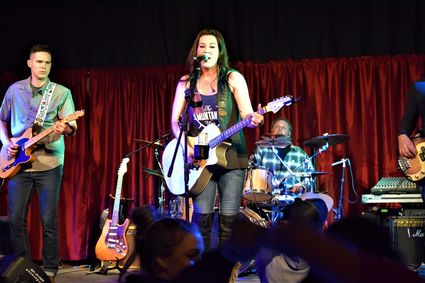 ROCKIN' THE REX – The Copper Mountain Band performed at the Rex last Saturday for a packed auditorium. According to Thompson Falls Film and Theater Foundation, nearly 200 tickets were sold.

The show opened with Third Avenue, a duo of 16-year-old musicians. They performed numbers by Janis Joplin, Tom Petty and the Heartbreakers, and The Beatles, to name a few. Third Avenue's musicians are Payton Rae and Cody, who is the son of CMB's Jacque Jolene and Nate Norman. Third Avenue set the stage for a night of acoustic energy despite the lead singer "popping" her guitar string before their performance ended.

"I'm glad this crowd is this large," was announced prior to CMB taking charge. "This is what it is all about! It started with Doug and Karen Grimm. This place is beautiful."

CMB formed in 2007 and has been touring the U.S. as well as France for the last 10 years, according to their website. From covers of the Dixie Chicks to Bon Jovi, they rocked the stage in Thompson Falls. Dancers decked out the front dance floor with line, slow and swing dancing throughout CMB's performance.

According to Debbie Wilson, secretary for Thompson Falls Film and Theater Foundation, there were 191 tickets sold. In addition to bringing great entertainment, Wilson said they are creating more fun by "trying a new lottery drawing for free tickets called Dead Man's Hand. We will always have two tickets up for grabs the night of our events." She outlined the rules: If you need a ticket, you can draw a card. If you get the ace or eight of a predetermined suit, you get a free ticket. Saturday's winning cards were an ace of hearts and eight of spades.

In addition to ticket sales, the Rex relies on donations. The Montana Way and Kyle and Lisa Ruen donated $1,000 each to the foundation on Saturday, according to Wilson. "We wound up with over $2,500 total in donations," she said enthusiastically. "Also, thanks to high school students Ellie and Megan Baxter, Jolia Buchanan and Sierra Hanks for volunteering," Wilson said, recognizing support work the students provided for patrons throughout the performance.

The Grimms spent more than 20 years operating the Rex, which was built in 1939. Thompson Falls Film and Theater Foundation took over duties after the Grimm's, and have been working relentlessly for the last few years to "Save the Rex." For more information, go to rextheaterproject.org.