TRACS takes in dozens of dogs 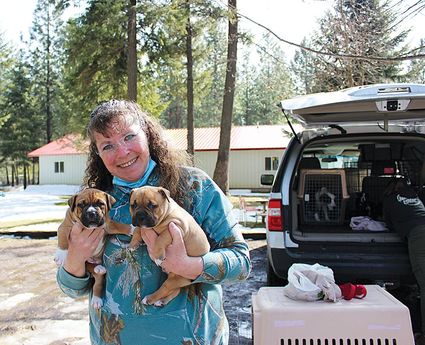 When historical winter storms pummeled Texas in February, the shocking aftermath was felt all-around the country. While Texas is normally known for its heat, the state struggled with handling the storms because of widespread power outages. The state's electricity infrastructure became overwhelmed because of subfreezing temperatures, creating a domino effect causing power failures in every type of power source. When Thompson River Animal Care Shelter (TRACS) operations manager Wanda Thorpe saw the devastation in Texas, she sprang into action.

Thorpe says her team was already on route when Best Friends Animal Sanctuary in Utah contacted TRACS for help with the situation in Texas. "We've partnered with them in the past," Thorpe said. "Because of the storms and power outages in Texas, shelters stopped taking in animals as a result." TRACS was able to take in a total of 46 dogs, 26 of which were puppies. The van of dogs came from Abilene, Texas, and according to Thorpe, were all in pretty good shape after their mandatory two-week isolation in Colorado.

To help alleviate some of the workload the shelter had taken on, Boulder Creek Academy out of Bonners Ferry, Idaho, reached out to TRACS lending a helping hand. The academy has collaborated with the shelter in the past as part of an academic program allowing students to work with dogs who have been deemed unadoptable. The academy fosters dogs from TRACS and each student is assigned a dog for the term. Students then have the job of training the dogs and preparing them for their future, forever homes. Troi Morris, animal and specialist project manager, teaches the class that always fills up with students every term. "It's a great class for the students," Morris said. "It teaches them responsibility, empathy and mindfulness." Morris says while it's a great experience for the children, they also look at it as an opportunity for community service. "We try to stay involved as much as we can," she said.

Morris and several of her students made the drive to Thompson Falls after TRACS took in dogs from Texas. For the current term, Boulder Creek Academy was able to take in two mother dogs and their eight puppies. "We work with three other shelters, but we love it here," Morris said. While TRACS will work hard to find homes for the remaining dogs, they will always jump into any situation when needed. "If we can help out people like the ones in Texas then we will, and we will do whatever we can," Thorpe stated.