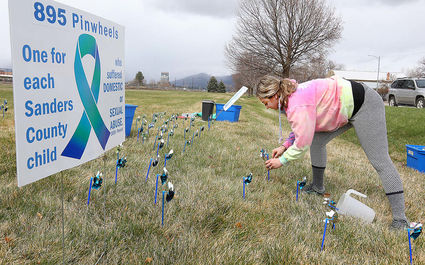 A group of pinwheels fluttering in the breeze might not halt domestic violence, but members of the Sanders County Coalition for Families (SCCFF) hope they will attract attention to make people aware that there is a problem.

Kayla Lehman-Torres, the supervised visitation program manager at SCCFF in Thompson Falls, and several volunteers created a field of colorful pinwheels at the Sanders County Courthouse a week ago and on the greenway along Railroad Street in Plains on Saturday.

"One of the many themes of April is Child Abuse Prevention Month. By its very nature, the pinwheel signifies playfulness, joy, and childhood," said Lehman-Torres, who coordinated the pinwheel display for the first time in her three and a half years at SCCFF. "The pinwheels have come to serve as a physical reminder of the great childhoods we want for all children," she added. At each location they set out 895 pinwheels - one for each of the children the nonprofit organization has individually served since 2000. She said that doesn't include cases by child and family services or law enforcement, or those that go unreported.

"We want others in the community to be aware of what is happening to our youngest victims. Unfortunately, this is all too much of a reality to many children, not only across our county, but across the state of Montana," said Lehman-Torres.

The cluster of pinwheels in Thompson Falls took Lehman-Torres, Jeanette Allday and about 20 youth volunteers to create. In Plains, it took about an hour with the help of her husband, John, Chad Kavanaugh, Lyla Sears, Lores Porter, Deb Cleveland, Kathy Hubka, and Kathy Gregg, all of Plains, to get the nearly 900 pinwheels on the greenway. "We have been lucky this year to have volunteers assist in the planting of the pinwheels," she said.

SCCFF has been doing the pinwheel project for three years, but this is only the second year for pinwheels to be placed in Plains. Lehman-Torres said they hope to have pinwheels in Hot Springs, Trout Creek and Noxon. "We believe the visual can bring awareness. We believe placing the pinwheels in heavily trafficked areas increases the probability of the community being aware of this type of thing, to pause and consider the significant impact child abuse can have in our community and across the nation," said Lehman-Torres. "When you walk or drive by and see hundreds of pinwheels blowing in the wind, and then you read what they signify, I think that can impact somebody. That abuse happens here. That it happens to the most vulnerable of our community," she added.

SCCFF believes that the pinwheel display sends a message that every child deserves the chance to be raised in a healthy, safe, and nurturing environ-ment. "They serve as a reminder that we all have a responsibility to create a community that promotes healthy environments for children," added Lehman-Torres.

SCCFF was established in 1993 and provides various services to victims of domestic and sexual violence, child abuse, and stalking and works closely with law enforcement and court representatives. According to the National Center for the Prosecution of Child Abuse, there were more than 2.9 million cases of child abuse reported in the United States last year. Twenty-eight cities in Montana have domestic abuse programs, according to SCCFF, which gets its primary funding from state and federal grants, although it also receives financial support from private donations. Lehman-Torres said they will be picking up the pinwheels the first weekend of May.