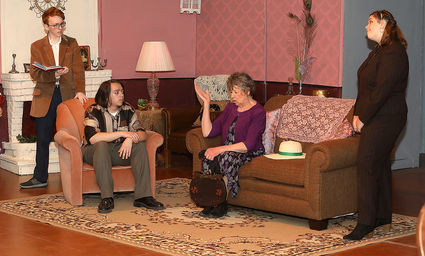 Saturday was the last time the Plains School Drama Club will ever perform at the fairgrounds pavilion, but the final time there was murder.

"You Must Meet My Wife" was a comedy mystery that included murder, deception, greed, and several twists to keep the audience guessing, said Terri Henry, who heads the drama club and usually only directs the plays. But real life sometimes has its own twists, too, and the drama club is no exception. One of the main actors, senior Ruby Martinez, was put on quarantine after the first performance on Thursday and there was no one to take her place. To keep in step with the old saying, the show must go on, Logan Steinebach, the club's light and sound technician, stepped up and volunteered to fill in for the second two shows. With Steinebach off the lights, Plains resident Eric Meckler, whose daughter, Leena, was one of two seniors in the play, volunteered to man the lights and sound.

Steinebach jumped into the role of Cornelius Sherwood with both feet for the final two performances. "It was really stressful the first time, but I was happy to help," said 14-year-old Steinebach, who felt much more comfortable in the last show. He had less than an hour before the second performance - his first show - to look over his lines, and as one of the main characters he had numerous lines. He used a book as a prop to have his lines in front of him during the performance. Because his character was a writer, the audience probably thought him looking at a book throughout the play was part of the gig, said Henry. "I don't think anybody really knew what he was doing; it looked natural," said Henry, who added that he gave feeling to his lines and periodically ad-libbed. "He did a great job," said Henry. Steinebach had acted in a rendition of "Peter Pan" in Paradise when he was 4 years old, but nothing since. That will change because he's now decided he wants to be on stage for next year's club plays.

Henry said that getting students to sign up for drama has been difficult lately. She said it's tough to compete with sports. It's the students themselves that do the recruiting. Occasionally, a student will watch a performance and sign up, but it's mainly the students in the club that enlist new members.

There were only six students in last week's play, which led to another twist. Henry was certain the kids would find someone to play Myrtle Peabody, a charismatic character who was raising funds and trying to get a donation from Richard Winslow, played by junior Dawson Brown, who's in his third year with the drama club. With only days until show time, Henry decided she'd have to do the part herself, the first time she's had to do that in the more than 25 years of being with the drama club. She had about a dozen lines, but the cast members helped her along by staying late to help coach her. Though Henry did some acting in high school in Colorado and she had fun with it last week, she said she'd rather direct then act.

"It was fabulous. I think the kids were perfect all three nights," said Henry. There were 36 people were in the audience the first two nights and 25 at the final show. The audience was limited due to COVID social distancing, said Henry. This was the last time for the Plains Drama Club to use the pavilion for its plays. The school paid $1,200 annually and the school normally puts on two plays a year, although last fall it was a radio show on the internet. The next performance in the fall will be in the new gymnasium building at the school, which will include a mobile three-section stage and a new lighting system. It will also have storage space for the club. It took two pickup loads to haul the stage equipment and props from the school to the pavilion. It also took two weeks for the students to set up. Henry said it's a little bittersweet because they have a lot of good memories at the pavilion, but she said she's looking forward to having plays at the school. The cast started rehearsing eight weeks ago, starting in the school library before moving rehearsals to the pavilion. They rehearsed four days a week for one and a half to two hours a day. Cathy Emmett once again served as the hair and makeup technician, as she has done for the last 20 years.

The play was set in the year 1949 at the home of wealthy Richard Winslow, who said his wife had disappeared. When another woman shows up claiming to be his wife, Tracy, played by junior Aubrey Tulloch, he thinks she's trying to get his money. At one point, he believes she and Father Hennessy, played by freshman Kaedin Jurek, are trying to kill him, but then he thinks they're trying to make him go insane. The priest is killed, but comes back. The delivery boy, played by Gabe Worrall, a junior, is stabbed and dies, but returns. At one point, even Cornelius and Eunice Sparks, Cornelius' trusty secretary, played by Meckler, turns on Winslow. In the end, he finds out it was an elaborate scheme to get him to confess to killing his wife. He finds out that none of the guests were killed, but were a part of the ruse as undercover police.