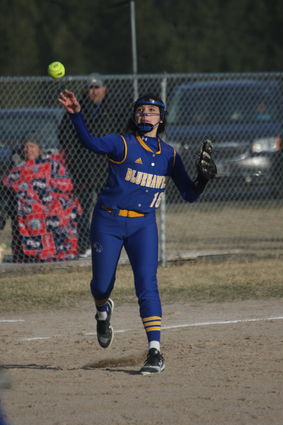 MAKING THE PLAY - Throwing a runner out from third base earlier this season, Cheyla Irvine and her Lady Hawks teammates will host Loyola in a doubleheader at Pirk's Place Thursday afternoon.

Literally hitting a cold streak in Anaconda last Thursday and dropping two games there, the Thompson Falls-Noxon Blue Hawks warmed up considerably Monday, taking a two-run lead into the bottom of the sixth inning before dropping a 6-5 decision to the Plains-Hot Springs Trotters in softball action at Plains Monday.

Still hoping to be one of the Western B-C teams to qualify for the upcoming divisional tournament in Florence May 20-22, coach Jared Koskela and his Hawks host Loyola for a doubleheader at Pirk's Place field in Thompson Falls Thursday beginning at 4 p.m.

For their part, coach Dani Crowe and her Trotters, also hoping to be one of the last Western B-C teams standing come tournament time, will travel to Florence for a doubleheader of their own Thursday against the powerful Falcons.

Koskela was encouraged by how his girls rebounded mentally Monday after the trying day in Anaconda last week, but one glaring statistic continues to bother him – and that's the number of runners the Hawks have been leaving on base.

"We actually out-hit Plains 14 to 8, but left a runner or two on base almost every inning," he said. "We need to take advantage of our opportunities better."

Riley Wilson, Blakely Lakko and Olivia Harnett added one hit each. Abbi Lane drove in two runs and Cella VanHuss and Wilson one apiece against P-HS.

Game stats for the Trotters were not available at press time.

Although the Plains-Hot Springs game was encouraging to Koskela, the Hawks endured the cold-handed blues in Anaconda Thursday, falling to Ennis 21-19 and to Manhattan 18-1.

Unseasonably cold weather (which really isn't unseasonable in unpredictable Montana) seemed to affect the Hawks more than Koskela would have liked. "It got pretty cold over there and we just didn't seem to deal with it real well," he said. "Our pitchers got cold hands and we ended up walking way too many."

walks to Ennis and another 18 to Manhattan. The Mustangs parlayed those free passes into 21 runs on only 10 hits, while the Tigers scored 18 runs with the aid of only seven base hits.

The Hawks hit well against Ennis, collecting 20 hits. Wilson led the way with five of those hits (including her second home run of the season) and drove in four runs, Vigil added four hits (including a double) and drove in a run, Abbi Lane had two hits and three RBIs, and Danni-jo VanHuss and Cella VanHuss added two runs batted in each.

Lakko and Harnett also had RBIs against Ennis and Irvine two hits and three runs scored.

Against Manhattan, Wilson tripled and singled, and Irvine, Harnett, Cella VanHuss and Abbi Lane all hit singles as effective pitching by the Tigers allowed the Hawks only six total hits and one run scored.