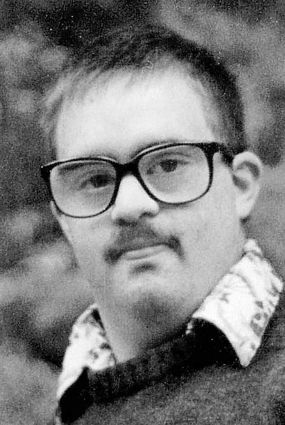 The chickens have come home to roost.

Ron David Koeneman was born December 8, 1967 in Bellevue, Washington. He was dealt a tough hand from the beginning as he was diagnosed with Down's Syndrome before it was popular. It was suggested he be institutionalized before anyone could become attached. Ron took this in stride and skillfully played his cards. He thumbed his nose and acquired support as he moved on and into the home of his parents, Trudy and Jack and his beloved brother Jephrey.

Ron attended special ed classes at the Gordon Houk center in Kirkland, Washington, for eight years where he became a crowd favorite.

In 1981 the family moved back to Heron, Montana where Ron attended school, first at Heron and then Noxon School. Ron was a good student and well behaved although at times encouraged by a few friends to act out. Once he was coached to give the Egyptian peace sign to Mr. Watts, the principal. Ron paid the price with a three-day suspension without revealing names which endeared him with the “fellas” but ended their enticement to the Dark Side.

Ron was invited to participate in the graduation ceremony of the class of 1988. Ron was most proud of this. At this time Ron retired to his home next to his parents’ cabin where he would receive guests of friends and old school chums and give each equal time and attention. Then it was back to the task of living large.

It was not all “peas and carrots,” Ron’s one vice was gloves. A glove held by the thumb part and flipped just so was the perfect “puppet friend,” and Ron had many friends. Any glove left unattended was fair game. Once Evert Behmerwohld thought he saw his missing glove among Ron’s friends, but was never able to prove it.

In 2013 Ron received a kidney from his brother Jeph. As Ron became ill it was suspected that the kidney was failing - not so. Then maybe it was the heart. Nope. Ron was simply an old man with Down's Syndrome and it was his time.

At 4 p.m. Thursday, April 27, and after a pretty good life, Ron played his last hand and cashed in his chips. He will be missed by most who knew him. You all know who you are.

If you can identify your gloves, they can be picked up at Ron’s house.