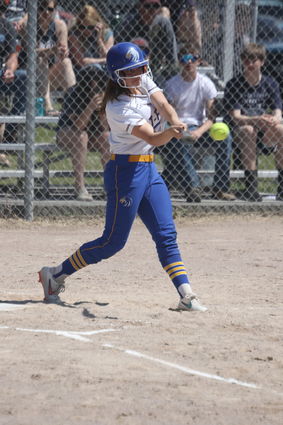 Rivalry games are important in their own right, but this one has some extra incentive built right in. The winner lives to play another day, while the loser will be forced to call it a season.

The Thompson Falls-Noxon Blue Hawks were set to host their Sanders County rivals, the Plains-Hot Springs Trotters in a one-game, winner-take-all, Western B-C softball play-in game Tuesday evening (see accompanying story) to see which local team will advance on to the Western B-C divisional tournament in Florence Thursday through Saturday.

Both teams completed regular season action with games last week as the Lady Hawks hosted Anaconda Saturday (falling 15-14 to the Copperheads) and the Trotters played a pair of doubleheaders, splitting road games with Loyola in Missoula Friday before dropping a pair of games to Mission-Arlee-Charlo in Mission Saturday.

With at least two more games in Florence this weekend on the line, rivalry games don't get much more important than this.

"It is a really big game for both teams," Blue Hawk coach Jared Koskela said. "It's seems that we have been stuck going on the road for a lot of these play-in games in the past, so it will be nice to have this one at home.

The home-field advantage did not work to the Hawks' advantage Saturday as they wrapped up regular season play hosting Anaconda, and the Copperheads left Thompson Falls with a wild 15-14 win.

The Hawks fell behind 15-7 by the end of three and a-half innings but came back to make things interesting at the end, scoring four runs in the fourth, one in the fifth and two more in the sixth before failing to get another run in the seventh and falling to the defeat.

"We got on a bad roll there early in the game and couldn't seem to get out of it for a while," Koskela said. "We finished the game all right but that cold start really hurt."

Wilson, of Thompson Falls, rapped out two hits, including a double and drove in two runs, and Vigil, of Noxon, hit the ball hard every time up to the plate and laced two doubles, driving in two runs.

For their part, the Trotters split two close games in Missoula Friday, edging the Breakers 4-3 in the first game but losing 6-5 in the second.

Celsey VonHeeder pitched the 4-3 win, scattering four hits and walking only two. She held the Breakers scoreless in the bottom of the seventh inning after the Trotters had scored the go-ahead run in their half of that inning. VonHeeder allowed no earned runs and recorded eight strikeouts in the game.

The Trotters won in spite of getting only one base hit (by Madison Elliott), scoring three unearned runs over the course of the game. Skylar Bergstrom had an RBI and a run scored, and Mykenzi Blood, Elliott and Carlie Wagoner scored the other runs for the Trotters.

Isa Bater hit two singles for Loyola and Molly McHash and Taylor Jansen one each.

The Trotters out-hit Loyola 9-6 in the nightcap but the Breakers used a four-run third inning to propel them to the 6-5 victory. 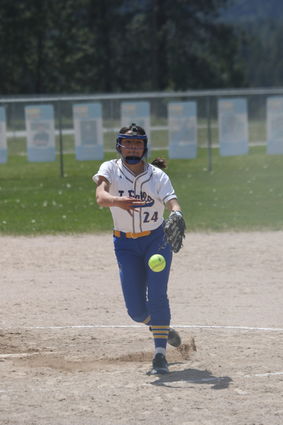 HIT IT IF YOU CAN - Hawk sophomore Cheyla Irvine fires a pitch duirng action at Pirk's Place in Thompson Falls Saturday.

Blood and Skylar Bergstrom had two hits each for Plains, and Kaylah Standeford, Elliott, VonHeeder, Wagoner and Krystena Boes one apiece.

Elliott and Boes knocked in two runs each and Blood one.

Jansen and Sovie Forgey had two RBIs apiece for Loyola.

Piper Bergstrom pitched for P-HS, allowing six hits, striking out six and walking only one.

Koskela looks forward to the rematch with the Trotters. The Hawks opened the season with an 11-6 victory over P-HS at Pirk's Place way back on March 30.

"We will see what happens, see which team shows up to play," he said. "These teams are very familiar with each other, we just hope the home field helps us."

The winner of the intra-county battle will face dangerous Florence, on their home field, in the first round of the Western B-C tournament Thursday.