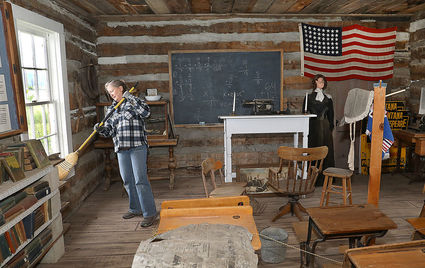 TIDYING UP SCHOOL – Kathleen Hubka of the Plains Woman's Club sweeps off a window sill at the old log schoolhouse.

The old log schoolhouse in Plains received a major spring cleaning last week in preparation for Plains Day and other summer events.

The project began last Wednesday, when Warren Hill, owner of Blackjack Power Wash, spent about one and a half hours cleaning the outside of the schoolhouse and using his powerful machine to strip off most of the old decaying paint from the building windows and doors. The job would have cost the Plains Woman's Club just over $100, but Hill, a Plains resident for the last three years, donated his time and equipment as a community service.

The one-room school was built in 1886 and was in operation for 12 years originally at a site near Old Airport Road. The Plains Woman's Club, a nonprofit organization, has been taking care of the schoolhouse for over 40 years, keeping it up with the help of government grants, private donations, and volunteer labor. In 1976, it was moved to the corner of Railroad and Clayton streets so it would be more accessible to the general public.

Ellen Childress, the club's secretary, said it took 300 gallons of water to wash the building and strip off the old paint, using cold and hot water and at different pressures. She wasn't sure when it was painted last, but believes it might have been around 1976. Childress said they plan to have the schoolhouse open from 9 a.m. to 1 p.m. on Plains Day, June 5. There will also be a bake sale and a "pickle on a stick" sale at the same time there.

"Every time we're here and have the doors open, people stop by and want to see it," said Childress. She said there are no set hours because the old school museum is run by volunteers. She believes it will be open during the Sanders County parade, too. 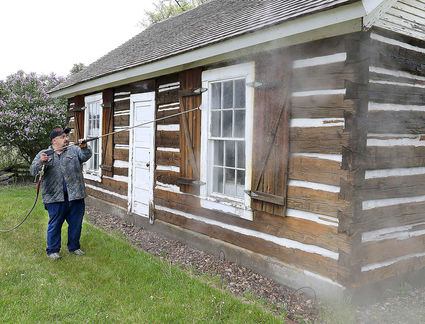 SPRING CLEANING – Warren Hill, owner of Blackjack Power Wash, cleans the outside of the old log schoolhouse in Plains.

The 18-foot wide, 30-foot long schoolhouse received a major facelift three years ago with a refurbishing of the logs. The previous year it had a new roof put on. The club plans to get the doors, window frames and gables repainted this year. Ted Seaman, Jr., a Paradise resident, has volunteered to do the job. The club accepts monetary donations to help pay for the building's upkeep.

"I think it's cool. We all have ancestors that went to a school like this," said Kathleen Hubka, a member of the Plains Woman's Club. "We have the actual building for people to see and really experience. And once a building like this is lost, it's gone forever," she added.

Childress, Hubka, and club members Deb Cleveland and Lores Porter, spent one and a half hours working at the schoolhouse on Friday. The ladies swept, dusted, and washed all the windows Friday. The volunteers will be working on pulling weeds and mowing the lawn prior to Plains Day.