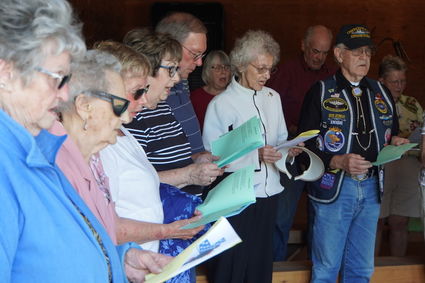 Residents stand and sing in remembrance at the Whitepine Cemetery ceremony marking Memorial Day on Sunday.

Community members gathered at the Whitepine Cemetery on Sunday to observe Memorial Day and honor veterans who have passed.

About two dozen residents gathered at the cemetery in prayer and song in remembrance. Pastor John Wallace of the Whitepine Community Church shared a few words about how grateful he was to all those who served and sacrificed. " I'm very grateful to those brave souls who died giving it all." Wallace also said it's easy to overlook the sacrifices of families on the homefront. "Let us never forget the loved ones who also sacrifice in supporting those who serve."

Wallace explained that he would not have been standing there Sunday without those who served. He said that his parents were children in England during World War II. "Had Nazi Germany won, I wouldn't be here today." 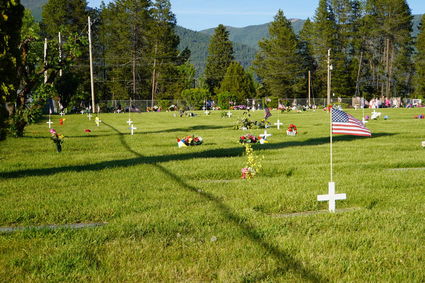 The Whitepine Cemetery on Sunday was a rainbow of colors as flowers and flags adorned gravesites.

Jan Manning led the crowd in "The Star-Spangled Banner," "America the Beautiful" and "My Country Tis of Thee." Those in attendance remained silent as Pat Austin read the names of each veteran buried in the cemetery.

Wallace asked who had served in the military, and almost half of those in attendance raised their hands. Lillian Laws shared the story of how her only brother was killed during the invasion at Normandy when he was 24 years old. She stated that some of her family members went to France a few years ago and visited Normandy, as well as Italy. Laws said that on Memorial Day, the town of Normandy adopts graves and decorates them. Wallace hugged Laws and thanked her for her brother and his service.

Margie Rawlinson shared a story of the origination of "Taps," which Manning played to close the ceremony.