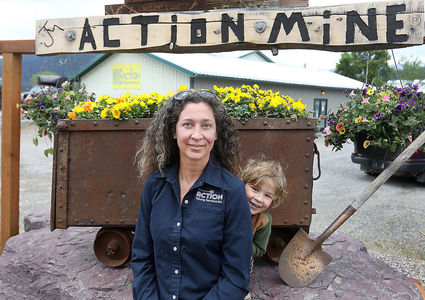 Plains is the new home for an old business. Action Mining Services, Inc.,  a company established over 40 years ago, set up operations in the former Butcher's Nook building and are open for business.

Action Mining Services manufactures and sells mining supplies that deals mainly with professional mining companies, but it also works with individuals as well as amateur prospectors who want to find and process precious metals on their own.

"We have a lot of weekend warriors that have buckets and buckets of ore that need to be processed," said Jessica Pullen, who owns Action Mining Services with her husband Darren. The company sells gear to help locate and retrieve precious metals, but its specialty is equipment that processes precious metals.

The company was started by Jessica's parents, Mike and Nancy Glenn in 1979 in Trona, California, where they also were miners themselves. In 1987, they moved he company to Nevada, where they owned two large gold mines, said Pullen. Eleven years later they moved the business to Sandy, Oregon, where she worked for her parents as the office manager for 20 years. Jessica moved to Anchorage for another line of work, but went back to Action Mining Services in 2005. Her mother passed in 2017 and her father retired a year later and moved to Florida. Jessica took over the company and Darren became the operations manager.

Pullen said they made the decision to move to Plains last year because they liked the area. Finding the empty 3,100-square-foot building on the east end of town was a little luck, said Pullen, who thought they were going to have to build a structure for the business. She said there wasn't much work that needed to be done to the building and what was needed they did themselves, officially opening for business in October with an office, a showroom and a product area. Action Mining Services is the only mining supplier in Sanders County, and possibly the only one of its kind in Montana.

Their clientele is mostly individuals and small mining businesses and they have customers throughout the United States, Canada, Europe, Asia, Australia and South America. They have more than 500 customers, many who have been with them more than 20 years. She said they get new customers every year, mostly through word of mouth, although they have a website - actionmining.com - that also attracts customers. They put out a 55-page catalog with more than 400 items from $3.48 stirring rods and small scales that start at $66.95 to large items, like the four-foot long Micron Mill Wave Table that sells for $12,295. The catalog includes how-to books, a  five-volume encyclopedia, instructional CDs, flasks, beakers, goggles, propane and electric furnaces, to name a few, and nearly 100 chemicals.

The company's specialty is its three Micron Mill Wave Tables that were designed by Pullen's father. The 2x4-foot M7 wave table is their biggest seller and can run 2,000 pounds of head ore in an hour and cleans up the materials. Their largest is the M10 wave table at eight feet long, but Pullen said they're probably going to phase it out. Wave tables use gravity to separate precious metals from ore (crushed rocks). Pullen believes their company makes processing precious metals less complex.

"People do well when they have precious metals. Gold mining should be treated like any other business, and in turn can be very successful," said Pullen. "Our wave tables will recover the precious metals, making it easy for our customers to smelt or sell to a buyer." Darren builds the tables for the company, once an order is placed.

Pullen said they're pleased to be living and working in Plains and they look forward to making Action Mining Services part of the community and continue as a successful business.

The store hours will expand in the fall, but for now it's Monday, Wednesday, Friday from 9 a.m. to 3 p.m. and Tuesdays and Thursdays by appointment. Action Mining can be reached at 826-9330.