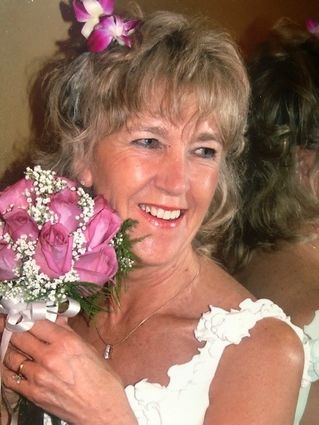 Gwendolyn Luree' (Cline) Esler was born New Year's Day, 1937, to Roy and Ann Lane in Gurley, Nebraska. She passed away at her home, June 4, 2021, after a short illness, surrounded by love.

Gwen grew up in Bonners Ferry, Idaho, with her large family. She was an accomplished horsewoman and spent countless hours riding and participating in local horse events.

She met and married Jerry Cline in Sandpoint, Idaho, in 1960. They moved to Plains, Montana, in 1962 where they raised their boys, Scott, Jeff and Steven. They spent the summers camping while Jerry worked in the woods around Western Montana. She spent her days taking the boys fishing and rummaging for treasures. They opened the family business, Double J Meats, in the mid 70's where she worked while always finding time to continue her favorite hobbies and being the greatest supporter of the boys. Gwen and Jerry moved to bigger adventures in Alaska in 1992. Jerry passed away in 1998.

In 2003 she met and married Jack Esler in Wasilla, Alaska. They spent a few years in Wasilla chasing the next adventure and traveling. They eventually made their home in Thompson Falls, Montana, on the Clark Fork River, where they enjoyed the beauty of Montana, the abundant wildlife, hunting and fishing, and the company of good friends. Summers were spent fishing and entertaining friends and family in Hoonah, Alaska, for many years.

Gwen will always be known for her love for her family and friends, rummage sales and anything antique, her love of fishing and for always looking like a million bucks!

Gwen is preceded in death by her husband Jerry, her parents, sisters Corky and Lavern, brother Jerry and beloved son Jeff.

She is survived by her husband Jack; sons Scott and Steven and daughters-in-law, Deanna, Moneak and Pam; grandchildren, Jennifer, Jamie, Jessie, Ashley, Heather, Rachael, Colton, Braxton and Allison; siblings Trudell, Glenda, Dallas, Vicki and Adrian (Rusty); along with numerous, special to her heart, great-grandchildren, nieces, nephews, cousins and friends from over the years.

Her ashes will be spread among her favorite fishing holes later this summer.

There will be a Celebration of Life August 7, 2021, at 1 p.m. at the Power Park in Thompson Falls, Montana.