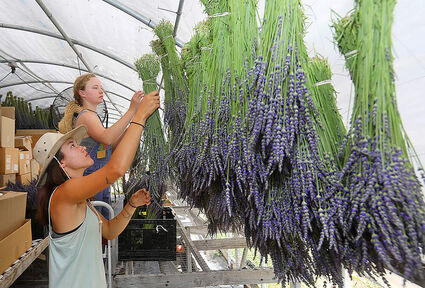 Paradise Gardens has had an army of workers tackling the flowing fields of purple over the last two weeks. They have a large tract to go and there's no end to the heat wave in sight. That doesn't impact the rows and rows of lavender to be harvested, but owner Paula Scoggins is concerned with the health of the 11 volunteers plucking and packing the plants and limits their time in the sun accordingly.

"I want them to have fun and not act like it's just a job. You're hanging out with the bees and the flowers and the smell of the lavender and that can be fun," said Scoggins, who owns Paula's Garden, which is part of Paradise Gardens. Each summer, volunteers from the Worldwide Opportunities on Organic Farms (WWOOF), an international nonprofit organization that provides volunteer labor to organic farmers, show up to help Scoggins harvest her lavender plants. She has eight WWOOF volunteers this year, all women. There are also two other women and one man that have returned as helpers and are not affiliated with WWOOF, although they had been there as WWOOF volunteers in the past. According to WWOOF, it is a work program that promotes an educational exchange and builds "a global community conscious of ecological farming practices" and teaches about organic agriculture. In exchange, the volunteers get free room and board, which in this case means tenting on the grounds.

Scoggins and Ted Seaman own Paradise Gardens, an organic farm located at the intersection of Highways 200 and 135. Seaman operates the fresh produce business under the name Paradise Gardens. Scoggins owns Paula's Garden, which online is called Paula Jean's Garden at https://paulajeansgarden.com. She also has a store on Etsy.

The volunteers this year came from around the country and range in age from 18 to 59. The WWOOFers' time at Paradise ranges from one to four weeks. Three of this year's volunteers are from San Diego and three have worked at Paradise Gardens as volunteers in the past. Ron Bigelow, 58, has hosted WWOOFers himself at his fruit and vegetable farm in Auburn, Washington. He didn't sign up with WWOOF this year, but is volunteering on his own at Paradise to help with the lavender.

The volunteers work only about six hours a day because of the heat. They rotate jobs and are seldom in the sun for more than two hours, said Scoggins. They usually work five days a week, but periodically some show up on the weekend. "I want my helpers to have time after work and on weekends to explore the local area and the rest of Montana," said Scoggins. "I don't want them to think farm work isn't fun; I want them to see the beauty of it."

Using a scythe, the volunteers quickly move from row to row, cutting the plants at the bottom of the stem. They bundle them and hang the lavender in the greenhouse to dry, which takes about a week. They separate the lavender according to variety and color. The plants are boxed and stored in a cool place ready for shipment.

Scoggins said the volunteers are essential to Paula's Gardens. With the WWOOFers, the focus is education for people who have usually never worked on a farm, said Scoggins, who enjoys teaching them about organic farming and likes their enthusiasm about the job. "My mission is to expose folks to the skill of lavender farming and it would be a good start to their own small lavender business," said Scoggins. She teaches about living and cooking outdoors and they have done construction and art projects during their stay.

"We choose to teach them lots of things, including making things from farm products. Last week, they made strawberry jam. I've taught lavender distillation and making lavender oil and hydrosol," said Scoggins, who has also taught workshops on herbal medicines, such as salves and lip balms. In addition, they've taken field trips and learned plant identification. "During COVID, it would have been almost impossible for us to harvest the lavender crop without WWOOF volunteers," she said. Because most of the WWOOF volunteers are women, two years ago she nicknamed her operation "Lavender Lady Camp." She said that Seaman does most of the irrigation and Bigelow sets up camp and takes care of the tool sheds and outbuildings. He also trims plants in the spring and fall and installs new irrigation.

"Part of the experience is learning farm skills, so education is a major part of the exchange. During COVID, my crew has been mostly WWOOF volunteers due to quarantine and travel restrictions. Having folks come on and off the farm wasn't an option for us. WWOOFers are our guests and end up friends," said Scoggins.

"We love working here. The community that Paula creates is why we come back," said 45-year-old Stacy Hardcastle of San Diego. "She teaches us how to farm and the ways of this plant and does it in a loving, gentle and artistic way," added Hardcastle. "I love the smell of the lavender," said 18-year-old Kiva Lukas, the youngest of the group, also from San Diego. 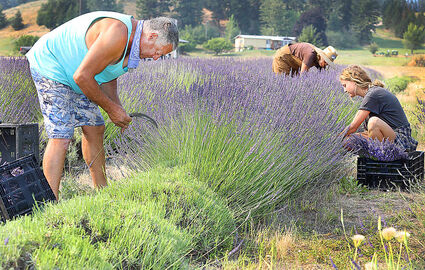 Paradise Gardens is comprised of 20 acres where Seaman produces cucumbers, tomatoes, corn, winter squash, pumpkins, watermelon and cantaloupe. "We do grow smaller amounts of herbs, eggplant, greens, peppers, potatoes, onions, beets, as well as a variety of other vegetable crops," she said. But for Scoggins, it's the fields of lavender that keeps her and her volunteers busy this time of year. She started her lavender business in 1995 with about 13 250-foot long rows of lavender and now has 40 rows of several English and French lavender varieties. A harvest usually takes three or four weeks, said Scoggins, who has been involved with WWOOF for about 12 years and has hosted at least 100 guest workers.

She sells bulk lavender and lavender buds to customers across the U.S., mostly for weddings, but also for home decor. She harvests an average of 4,000 lavender plants a year and has about 1,500 customers a year. "Trips to English lavender farms gave me a love for growing lavender in general. I didn't start it as a business, but as something I loved and then wanted to share. It is beautiful, fragrant and useful and many people really love it," said Scoggins. "Weddings are typically joyful celebrations and it's lovely to have a business centered around people making commitments to love."

Scoggins said she's grateful for the help she gets from employees, friends, family and volunteers over the years and said she couldn't have done it without them. "This year's crew is wonderful," she added.