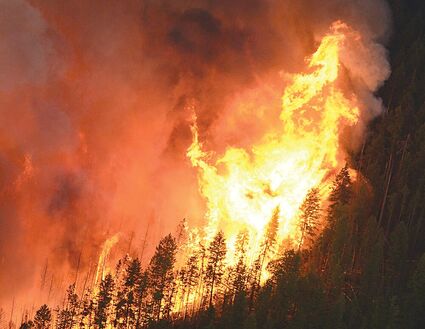 Aerial photo by Dave Bennett THE THORNE CREEK FIRE engulfs a hillside in flames earlier this week. As of Tuesday, the fire had burned more than 8,000 acres.

That fire on the mountain everyone has been watching is going to be with us for a while.

The Thorne Creek fire, which was ignited by lightning July 7 and has been steadily growing and visible from the Clark Fork Valley floor since its inception, will likely be a long-term wildfire event that will be going on for at least several more weeks.

The fire has already triggered many evacuation warnings and several actual evacuations as the fire front has moved on the hillside each day. In an effort to keep the fire from getting an opportunity to make runs in sensitive areas, including populated places, helicopter firing operations have been utilized over the last several days to keep most of the heat away from those areas and up on the hill.

As a result, some homes in the Graves Creek area and others along Blue Slide Road have been evacuated and several others are on evacuation warning protocols. Follow #WestLoloComplex or the Sanders County Wildland Fire Information sites on Facebook for real-time updates on evacuations, which are enacted and carried out by Sanders County Sheriff's Office personnel if and when they are deemed necessary.

Making a longer story short, all homes determined to be at risk from the fire, from Graves Creek to Thompson River (north of the large powerlines above of the community of Thompson Falls) are currently in pre-evacuation or actual evacuation status.

Due to the fire being on some of the more rugged, steep, inaccessible terrain in Sanders County, posing a great risk to placing firefighters directly on the scene, the decision was made early on to not attempt to put firefighters right on the blaze because of safety concerns, such as the lack of access and dearth of safety zones and escape routes.

With the fire listed at 8,490 acres Tuesday morning, managers are optimistic about keeping it out of the main Clark Fork valley as an anchor point near the Graves Creek-Thorne Creek intersection had been established by that time.

"We feel really good about getting that anchor point established," Thorne Creek incident commander Drew Daily said. "We are working on securing and holding that line now and hope to be able to allow some homeowners back on to their property in the coming days."

Those that do return to their properties in the next several days will remain in pre-evac status for the time-being, Daily added.

Mopping up and putting that anchor-point portion of the fire to rest and continuing to bring fire down along the pre-constructed fireline that has been built from Graves Creek all along the base of Silcox Mountain to Thompson River will be the priority in the coming days. Fire lines are also being constructed at strategic points in the Thompson River drainage in case the fire advances that far.

The head end of Sqaylth-Kwum Creek (formerly known as Squaw Creek) was fired out Monday as the team tries to strategically create a fire front less susceptible to making large runs, and to protect values at risk.

"We will be moving at a slower pace today," Daily said Tuesday, "making sure we are getting the desired results before we move to the next phase."

The fire has been problematic from that first day (when it consumed 230 acres on its opening runs up the Thorne Creek drainage) due to a variety factors, a large one being availability of firefighters, and other vital resources key to control efforts.

"There were 78 outstanding orders for fire crews in the system this morning," Daily said Tuesday, "and we need high-capability, hot-shot type crews to work on a complex incident like this. We are getting some crews in, and have been able to borrow some key personnel from surrounding areas, and that has helped."

A few of the helicopters and engines, along with firefighters on the ground, were concentrated in the anchor point zone of the fire earlier this week attempting to shore up control on that portion of the fireline.

As challenging as this assignment has been so far, Daily, who has been here with the fire team since it arrived in early July, says he has been encouraged by the local response to the situation. 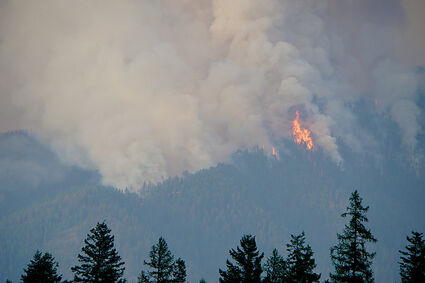 A HELICOPTER dropped aerial ignitions along the hillside Monday evening in an effort to help battle the Thorne Creek Fire near Thompson Falls.

"The highlight for me has been the amount of cooperation we are getting from everyone on this fire, it has really been a group effort," he said. "The county government, the sheriff's office, the rural fire departments have all been great.

"And the folks in Thompson Falls have been very engaged during our community meetings," he added. "We really appreciate that support and are striving to keep the public informed on how it's going and what we are doing."

Without much meaningful precipitation for a few months and searing summer heat continuing to bear down on the western U.S., little relief is in sight for already-weary firefighting forces. And we have not even reached the traditional part of fire season (usually early August into the beginning of September) when wildfires normally burn the most and the hottest.

"Resources are already hard to come by," Daily said, "and we are entering the period when wildfire activity usually just begins. The next several weeks could be challenging for fire control organizations across the west."