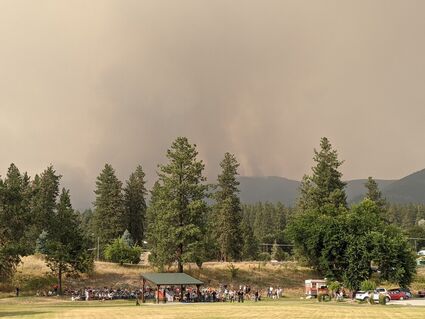 Residents gather at a community meeting Friday evening at Ainsworth Park as the Thorne Creek Fire burns in the Weber Gulch area north of Thompson Falls.

The Thorne Creek Fire continues to burn just north of Thompson Falls. As of Saturday morning the fire, which was sparked by lightning on July 8, had burned 15,860 acres and was 0% contained.

More than 150 residents attended a community meeting at Ainsworth Park on Friday as the Thorne Creek Fire burned north of Thompson Falls in the Weber Gulch area. Drew Daily, incident commander for the Thorne Creek Fire, said that three Type II National Guard firefighting units would be arriving Saturday (July 31) to help with the blaze, as well as a Type I team with advanced training. "We'll have a flow of more consistent resources now," said Andy James, who is in charge of plane operations for the fire. He noted that while aerial ignitions had been a part of the firefighting operations earlier in the week, the crews had not utilized that technique in two days.

"The fire has moved around, but it hasn't done anything we haven't expected it to," Daily told residents Friday evening. Jenny Perth, who is monitoring air quality during the fire, said clear air is coming over the weekend and that residents can expect to see some wind, but then moisture will come later in the weekend.

A shelter has been established at the Thompson Falls Community Center on Golf Street by the American Red Cross. Scott Franklin, a Red Cross volunteer from Eureka, set up the shelter and said he tries to make sure he has the latest information and resources for those affected by the fire, as well as residents in the area. He said earlier this week that anyone can stop by, have a cold drink and a snack and get information about the fire. While they have donations of food and water, the shelter is in need of community volunteers to assist evacuees at the shelter. The shelter can be reached at 827-9268. Bill Naegeli, Director of Emergency Management Services for Sanders County, told the public Friday at the meeting that they have resources for those needing to move pets, livestock, belongings, vehicles, boats, RVs or other property. Sheriff Tom Rummel said an additional eight deputies from Ravalli, Gallatin and Flathead counties are helping patrol the area. The county will establish road blocks to secure areas where residents have been evacuated. "I have zero tolerance for anyone on your property without your permission," Sheriff Rummel said. "That's trespassing." He said there will be a pass system and that people wanting to enter an evacuated area will need to prove their residency before being allowed on to the property. 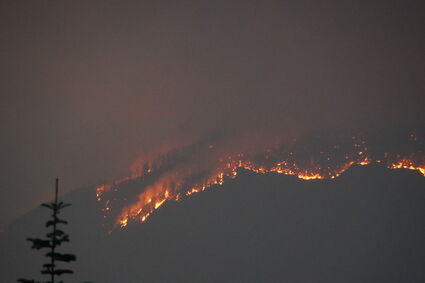 Residents of Weber Gulch Road expressed concerns over the management of the fire and how many acres the fire has burned. "You all need to slow down," said resident Rodney Harmon. "I think you need to take a step back." Daily responded that the limited resources available for the fire prompted an indirect strategy to bring the fire down the mountain in a controlled manner. "We do not have the resources to go direct on this," Daily said Friday evening. "We are considering every option we have. We are bringing the fire down the slope on our terms because we don't have the resources."

COVID-19 and keeping fire crews safe is a priority, said Carolyn Upton, supervisor of the Lolo National Forest. She noted that public meetings have to be held outside so they can continue interacting with the public and keep everyone safe. She said as crews are dispatched to help on the Thorne Creek Fire, they are working to keep them as separate as possible. "The reality of COVID is that when it gets into a fire crew or district office, it makes it hard to function," Upton said at the public meeting.