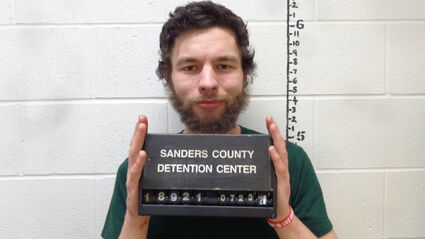 Thompson Falls Police Department (TFPD) discovered and dismantled two meth labs in the city late last month. Police officers, including lead officer Roy Scott, spent numerous hours building the case, investigating leads and filing paperwork needed to apprehend those involved. "They get into a lot of overtime, long weeks and a lot of paperwork, especially the lead officer on the case," according to TFPD Chief Chris Nichols. He explained that in a case like this, the lead officer can put in well over 65 to 70 hours a week, and it takes a lot of commitment from everyone. When officer Scott was asked about his work taking down the labs, he said "that crap won't be tolerated here."

According to charging documents, on Friday, July 23, TFPD was notified about a warrant for a local man on probation. Having knowledge of previous drug-related charges, the officers set out to find Lake. He was located at his place of work and arrested by Scott. After being taken into custody, drugs and drug paraphernalia were discovered on his person. Upon reasonable suspicion that there were other probation violations in the car, Adult Probation and Parole Officer Lynn Bierwagen requested that Scott conduct a search of Lake's vehicle. Scott, along with Officer Michael Derry, performed that search. Numerous unusual things were discovered, the officers said. "As we were pulling things out one by one, they were not illegal, but they were odd to have in a vehicle. Once all these things were pulled from the vehicle, that's when we realized that together, all of these items were illegal," said Scott.

The officers discovered what Chief Nichols referred to as a "shake-and-bake" clandestine methamphetamine lab. This setup can be mobile, requires very little space and is a "one-pot" cook method that involves several bottles, tubes and chemicals.

The officers contacted the Northwest Drug Task Force (NWDTF) for assistance. A team was sent the next day to address the vehicle, neutralize the equipment and take several samples. During the removal of the mobile lab, officers had a firefighter dressed in full gear, along with an ambulance, on standby. According to Nichols, this type of lab can be extremely volatile, and their disposal requires having first responders on scene.

On July 27, Bierwagen conducted a search of Lake's residence, where she was directed by the landlord to an outbuilding. There, she discovered what she believed to be another methamphetamine lab. Both Scott and Derry responded to the residence that afternoon and concluded that it was in fact a second lab.

Officers again contacted the NWDTF about the lab, who again arrived within the next couple days to tear it down and dispose of the chemicals. Once more, TFPD and Thompson Falls Ambulance were present on standby. No matter the size, each lab takedown, according to Scott, can take a lot of time and manpower to keep the process safe. Using a rangefinder, Scott determined the lab to be located less than 500 feet from the Thompson Falls Junior High. He noted numerous family residences near the lab site.

"I appreciate the cooperation shown between the police department, Adult Probation and Parole officer Bierwagen and the NWDTF in order to eliminate two methamphetamine labs from this community," Chief Nichols said in a press release. "I know our officers worked very hard and put a lot of man hours into this case. Methamphetamine labs create significant risk to the public. This is not only because of the highly addictive drugs produced, but also because of their explosive nature and the poisonous waste produced from them." Nichols applauded all the officers involved.

"I really appreciate the support I'm getting from the Thompson Falls Police, not only for the safety of the community, but my own," Bierwagen stated. She explained that she is the only probation and parole officer for the county and that she must do visits and searches on premises that could be very dangerous. She relies on support often from the city police during these searches. Bierwagen expressed great appreciation for the work the Thompson Falls Police are doing.

According to Bierwagen, the investigation is ongoing.