OUR VIEWPOINT: That time firefighters saved a baby shower 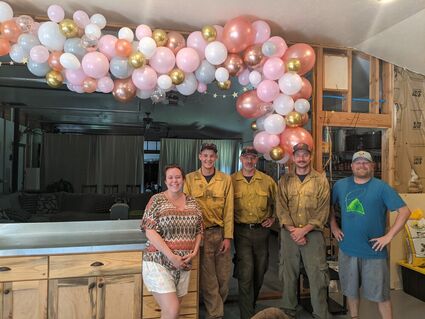 Andrea and Rob Christensen of Thompson Falls got help from firefighters (from left) Damian, Eric and Bill of the Gypsum Fire Protection District in Colorado when they were forced to move their baby shower on Saturday.

Sometimes things don't go as planned. This past weekend we had a baby shower for my friend Andrea. She and her husband Rob are expecting a baby next month, and Andrea has been planning this shower down to the last detail for the last several months.

What we didn't plan on was the Thorne Creek fire roaring behind their house north of town. Friday evening, fire officials said we "should be good to go" for Saturday's shower. At 7:30 a.m. Saturday, however, Rob and Andrea awoke to a knock on their door saying they weren't good to go, and the shower needed to be moved. I told her it would be OK, that we would have a wonderful event even if we were sitting in a parking lot.

I drove up to Rob and Andrea's house to move a baby shower. We had set everything up Friday evening, including a 20-foot balloon arch (see photo below). "I'm here to move the baby shower," I told the National Guard as I drove up to the road block. Then I drove to the firefighters, Scott and Brian, who the evening before said everything would be good for the shower. They were very apologetic and I was understanding. The most important thing is keeping people safe. Scott asked if we needed anything and I said we could use some help loading everything up. Within five minutes, three firefighters showed up to Andrea and Rob's and loaded a baby shower into the back of my car. Eric, Bill and Damian were so helpful. These Colorado firefighters were in the area on a 14-day deployment and their duty was structure protection. They were so helpful, and our 20 minutes with these gentlemen, who traveled literally a thousand miles to protect the homes of strangers, were our guardian angels.

There are more than 400 personnel from all over the West here working on the Thorne Creek fire and keeping all of the residents safe. As the fire creeped into Ashley Creek and closer to homes Saturday evening, I couldn't help but think about Eric, Bill, Damian and all the other firefighters who put the safety of others first. How else do you describe that except as brave?

We moved the baby shower to the golf course and it was a beautiful event. What started out as a dissapointing knock on the door Saturday ended with a joyful baby shower, new memories and a unique experience for those Colorado firefighters.

As for that balloon arch, it's still hanging in Rob and Andrea's house. When I jokingly asked the Gypsum firefighters if we could get a helicopter to move it, they said probably not. Thank you Bill, Damian, Eric and all the personnel here helping us in Northwest Montana.