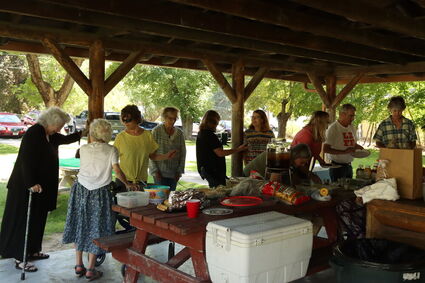 Thompson Falls Book Club members attended a luncheon recently to celebrate the farewell of Mary Netz, who is moving out of the area.

A Thompson Falls book club recently honored its founding member. The club was started and organized by Mary Netz in 2001, after she moved to Thompson Falls from New Mexico. According to Netz, she was part of a book club in New Mexico and found that she missed it, so she started her own in Thompson Falls. However, at 87 years old and with worsening Parkinson's disease, Netz has decided to move back closer to family in Albuquerque, New Mexico. "It's so beautiful here, it reminds me of northern Maine," she said, adding that she is sad to leave Thompson Falls. The club held their first meeting, Wednesday, August 11, in over a year, since the onset of the pandemic. The meeting was held at the Power Park in Thompson Falls, where the club also had a luncheon as a farewell to Netz.

"She's just one of the most positive wise people I have ever met," said book club member Kris Anderson. She, along with other club members, are sad to see their friend go. According to Netz, she wants to give her family the assurance that she is being taken care of, and with family constantly coming out to help, she felt this move would allow them to continue to live their own lives.

Netz was a teacher and lived in New Mexico for many years, but she grew up in rural northern Maine. She explained that she loves the small town, the nature and the mountains of Sanders County, Montana. When asked why she loves to read so much, she said, "I have always lived in rural places. I didn't get to see the world, really. Books take you there, and it's something you can do from wherever you are." Another club member, Cletus Jacobson, said that she too is a "read-a-holic," but explained that the best part of the club, for her, are the discussions. "Other people may have an idea that never entered my mind." Jacobson was not the only one who said this. Most of the members said their favorite part was getting together to talk about the books and to see what everyone else had to say about them.

There are around 15 members in the club, and they meet every second Wednesday of the month. Meetings are invitation only, and participants found out about the club through friends. Jacobson explained that most book clubs meet in the evening and drink wine, however, they consider theirs a "coffee book club," which meets in the mornings. They say this is because their minds are fresh, and so are the discussions. 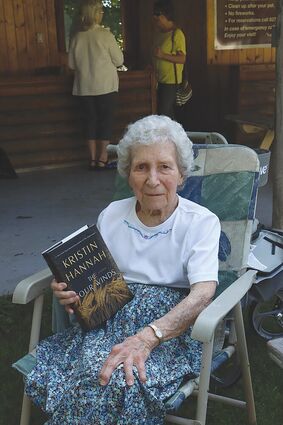 Mary Netz started the book club in 2001, after she moved to Thompson Falls from New Mexico.

At the beginning of the year the group has a committee that selects a book to read for every month based on a list of suggestions by the group. During meetings the group will discuss the book they read previously, and an elected host will give a biography on the author of the next month's book. Books vary in genre, and each is discussed based on character development, comparison to other books by the same author, whether they liked or disliked the book and more. The book they read in August, called The Four Winds written by Kristin Hannah, was about the dust bowl. The September book is going to be The Dressmaker by Rosalie Ham.

The club reads 11 books a year, skipping a book and a meeting in December. During that time, they used to trade books, but have begun collecting children's books to donate to toy drives.