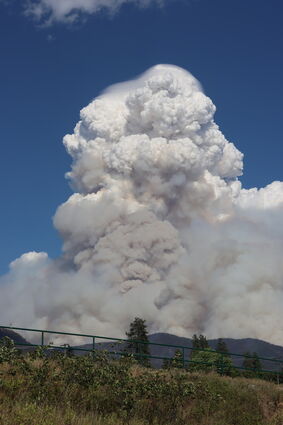 SMOKE FROM the Thorne Creek fire, as seen from AInsworth Park, billows above Thompson Falls on Monday afternoon.

A moving, growing, often glowing fixture on the landscape in the mountains north of Thompson Falls for over 40 days now, the Thorne Creek blaze, which was ignited by lightning on July 7, saved some of its most explosive runs for last week, burning over 6,000 acres Sunday and almost 4,000 more Monday to arrive at its current estimated acreage of 35,993.

Notes from Monday night's infrared mapping flight indicated that large smoke plumes prevented accurate scanning of the entire fire area, leading to a perhaps incomplete picture of where the fire is actually at on the ground.

The Southern Area Incident Management Gold Team assumed command of the Thorne Creek fire Friday evening, replacing the Northern Region Type 1 IMT which had managed the fire for much of its life during July and August. Welcome rains were finally visiting the area Tuesday.

"I am listening to the rain coming down on our yurt right now, and it sounds really good," Gold Team incident commander Debbie Beard said Tuesday afternoon. "We are hoping the precipitation gives us a little bit of a reprieve and helps us work towards getting this fire taken care of."

With the fire burning actively in the Snider and Copper King area Monday, five helicopters were busy for most of the day dropping water to protect structures and secure fire lines, and city and rural fire departments from across the county were called in to assist.

"Local cooperators came in from across the county last night and were a tremendous help to our firefighters," Beard said. "I am happy to say no structures were lost."

Although structures and homes remain threatened by the Thorne Creek fire and homeowners are still under evacuation orders in the lower Thompson River area in the Snider and Copper King areas, most of the pressure has been taken off the Mount Silcox front, from the Graves Creek area southeast all along the base of the mountain to Ashley Creek and the Montana FWP Wildlife Management Area, a stretch of about 12 miles.

Over 200 residences in that area were in pre-evacuation or evacuation status at different times over the past several weeks as the fire progressed in a southeast direction. Beyond those residents, the people of Thompson Falls and other residents of the Clark Fork valley have warily watched the fire day after day this very hot, dry summer.

Significantly, no structures have been lost to the Thorne Creek fire. Perhaps one of the most important buildings, the Priscilla Peak lookout building was wrapped with fire-resistant material and also doused with retardant by a single engine air tanker during Monday's operations in the Thompson River and West Fork of Thompson River.

Utilizing a shaded fuel break with dozer and/or handline constructed as a control line along the base of the slope, fire managers were able to successfully bring the fire down to that holding line using tactical firing and burning out operations the last few weeks when the fire grew close to the line.

For the record, the residents of the Graves southeast and northeast zones and the Harlow Road area have been moved from evacuation orders back down to no pre-evac or evac orders, the Ashley Creek zone remains in pre-evac and Thompson River residences are still in evac status as of Tuesday morning.

The lower 17 miles of Thompson River – the Sanders County and ACM roads – are closed until further notice due to fire activity.

The Graves Creek and Vermilion River road systems remain closed to the public, and fire managers were considering the closure of the Deerhorn, West Fork of Fishtrap and Beatrice Creek roads as well earlier this week as the fire advances into that area.

A wooden bridge on the Graves Creek road at about the six mile mark was destroyed by the fire Sunday, making that road impassable at this time in any event.

As the community of Thompson Falls breathes a collective sigh of relief with the fire being "around the corner" and into the Thompson River corridor, Thorne Creek fire managers prepare for the next chapter in the management of the blaze, which has now burned north to northeast of the town for almost a month and a half.

GOING IN FOR another load, one of the five helicopters working to contain the Thorne Creek fire dips into the Clark Fork River.

The main reason for the sigh of relief is the fact that the Thorne Creek fire's southwestern edge has now cleared threatening the community.

"Everybody is tired, including the public," Beard said. "After this weather system passes we will be able to reassess the plan for containing this fire and move on from there."

As of Tuesday, 374 personnel were assigned to the Thorne Creek fire, including six crews. Thirteen engines, five helicopters, 12 water tenders, a dozer, two skidgens and a masticator were also listed as being available to fire managers.

Depending on the amount of rain the area receives and how much that affects operations in the coming days, the plan will be to continue to monitor the fire's spread to the northeast, as well as continuing to mop up along the eastern perimeter, and to identify additional opportunities to arrest fire spread.