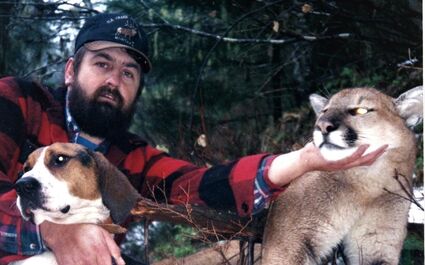 Ron was the second child born to parents Doyle and Irene (Watson) Chenoweth on November 11, 1958, at Saint Patrick's Hospital in Missoula, Montana. His siblings included an older brother Del and younger brother Darrell and sister Joyce.

Ron attended school at Trout Creek Elementary until eighth grade before continuing his education at Noxon High School where he graduated in 1977. While in high school he met and dated high school sweetheart Virginia Platt of Heron. They were married on July 16, 1977, in the Heron Methodist Church. After their wedding, they moved to Huntley Project in Billings, Montana, where he worked at Vogel's feedlot. They welcomed their first child, daughter Crystal, in September of 1978. The following year in 1979 they moved back to the area to Heron, Montana. Ron and Virginia's family continued to grow with the birth of daughter Cathy in October of 1980, son Justin in June of 1984, and daughter Casey in July of 1994. In August of 1997, the family relocated to Trout Creek to the home Ron had built.

Ron worked a variety of jobs throughout the years. He was a logger, ranched cattle, ran an elk game farm, raised bison and was a hunting guide. He worked construction building houses in Montana as well as Alaska during the summers. He also made signs for scenic turnouts for both Montana and Alaska. He ran long haul trucking for Palmer Trucking company for two years.

Ron was the happiest in the middle of nowhere on top of some mountain either hunting or just watching animals. He had a gypsy soul that enjoyed exploring and seeing new places and always was on the go. He liked taking care of the wildlife by making sure the deer and elk had hay and turkeys cracked corn in the winter. He was also known for bringing home sick or injured animals that needed some help before being released again. Ron enjoyed being with friends and was always there to help them if needed. Ron always did what he wanted, how he wanted, and when he wanted to. He never did anything that he didn't want to do.

Graveside services will be held on August 21st, 2021, at 1 p.m. at the Whitepine Cemetery with a reception to follow at the Lakeside Resort in Trout Creek, Montana.

Family and friends are invited to sign Ron's online guest book at http://www.coffeltfuneral.com.

Arrangements are under the care of Coffelt Funeral Service.