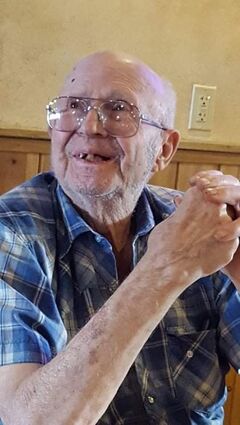 Calvin Lawrence Howard died in his sleep August 14, 2021. He passed due to natural causes at the age of 93.

Calvin was born August 2, 1928, in Camas Prairie, Montana, to parents Laura and Lawrence Howard. He went to school in Missoula and after, moved to Thompson Falls. He worked as a diesel mechanic after school and later bought his own logging truck.

He met his wife Delores Sharp in Darby, Montana, and they were married December 22, 1952. Calvin and Delores were married for 62 loving years. They had two children, five grandchildren and nine great-grandchildren.

Calvin logged from 1950 to 2016. He received an MLA award for log hauler of the year and also received a certificate from the State of Montana for 50 years of no accidents or overweight tickets.

Calvin and Delores also owned the local West End drive-in in Thompson Falls for a few years where the family all worked.

Calvin bought an airplane in the 70's and loved to fly it as a hobby. Calvin and Delores were also in the C.B. club for many years and very active in it.

Calvin and Delores were well known in the community and had different home-based businesses throughout the years. They loved to go camping with family and friends. Calvin loved fishing and hunting. They would host several BBQ gatherings down at their property on the Clark Fork River. They were well known for their hospitality in the community, several teenagers in Thompson Falls considered the Howard home the local hangout during the summers.

Calvin will be greatly missed by family and friends.

There will be a potluck celebration of life at Trout Creek Park on Saturday, August 28, at 11 a.m. Please bring your own chairs.