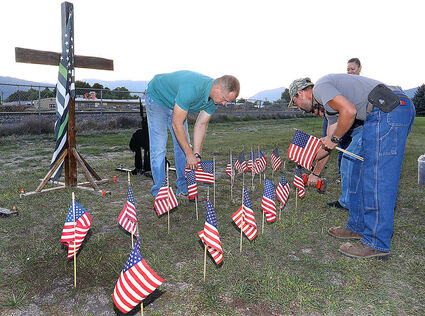 SUICIDE AWARENESS – Noah Hathorne (left) straightens flags as Hunter Fielders puts another one in place along the greenway in Plains. Behind Fielders are volunteers Ed Foste and Heather Allen.

The kneeling silhouetted soldier is back once again on the greenway in Plains to bring military veteran suicide awareness to the public's eye, but now he's accompanied by the likeness of a female soldier to represent woman veterans that have been the victims of suicide.

"Women served in the mili...