Hawks off to a running start 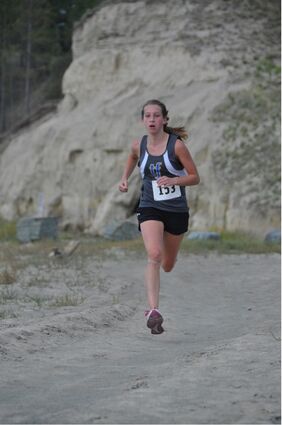 The Blue Hawk Harriers are literally off to a running start this season with two meets under their feet. The Hawk cross country teams started competition at the Grant Kohrs Ranch Invitational in Deer Lodge on August 26. The trail run took the athletes through the Grant Kohrs National Historic Site. There the Blue Hawk varsity boys finished third, the junior varsity boys finished first and though the girls did not have enough runners to compete as a team, three of the four finished in the top 10.

"Faith and Molly have finished well in the last couple races, and Hattie will return this weekend to make for a great trio of girls, while Roni continues to drop her time," Blue Hawk Cross Country Coach Sarah Naegeli, referring to Neesvig missing the Eureka meet as she was showing her 4-H projects at the Sanders County Fair last weekend. 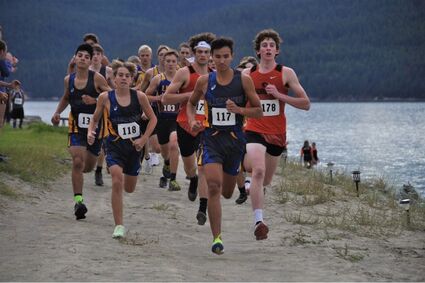 LEADING the pack at Eureka are (from left) Blue Hawks Alessi Rolando, Cael Thilmony and Will Hyatt.

"We saw lots of improvement in times from last week," Coach Sarah Naegeli said. "We're seeing our runners put in the miles and figure out their pacing and we look forward to a larger meet next week in Kalispell." Naegeli added that several of her runners put in summer miles and is benefitting them as the season gets underway.

Evan Lofthus was the only junior high boy to compete for Thompson Falls, finishing in 12:23.