Tree grows with help of volunteers 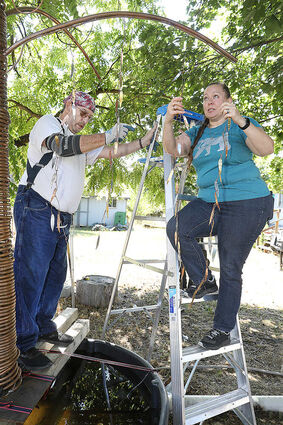 The folks at the Clark Fork Valley Hospital Long Term Care will be getting a one-of-a-kind tree that is self watering and never drops its leaves, compliments of a local nonprofit organization.

It took volunteers of Joint Operation Mariposa (JOM) just over a year to make the nearly nine-foot tall copper willow tree, complete with a 300-gallon tank just below the surface that will resemble a pond.

"I like it. It's different," said JOM member Ed Foste, who had a good idea how to build the tree because he had been a pipe fitter in Arizona before serving in the Navy. He also did some research on YouTube for the project. The idea for the metal sculpture came from Plains resident Dave Williams, president of JOM, an artist and a Navy veteran.

"The willow tree, besides being one of my mother's favorite trees, is the perfect metaphor for us humans," said Williams. "Every aspect of a willow changes in the wind. The branches of the tree sway and swing as if brushed by a giant hand and the leaves tremble and shake in the slightest of breezes. Then if you look down you see new starts coming up from the ground forming new trees from a weeping giant," he said.

Although JOM is a military veteran organization, Williams wanted to get other non veteran community members involved with the project. "I knew that I wanted to add works by other artists and that we would require skills that we didn't possess, so I reached out to these amazing people and they agreed to help," said Williams, who founded JOM six years ago to help veterans of Sanders County through various means, including art. "We live in a wonderfully talented and imaginative community and we are truly blessed to have their help and vision," he said. Williams noted that JOM doesn't do things just for veterans, but for the general community as well, such as giving away a million pounds of potatoes throughout western Montana during the pandemic, sewing masks and providing hand sanitizer as part of an outreach program to the community.

The tree is nearly done. Foste and JOM member Heather Allen recently attached the 16 branches to see how it looks. The wire branches range from 41 inches to 52 inches long with brass, copper and aluminum leaves that were cut by Allen, who served in the Air Force for 10 years. It took Allen about seven hours to make the 359 metal leaves, which range from three to four inches long. "That way as they age they will all turn different colors on the tree," said Allen. Foste had to solder numerous spots on each branch to keep the leaves from falling to the bottom. The idea was that the leaves would whirl in the wind and spout water, said Foste.

"I wanted to help with the sculpture somehow and since Joint Operation Mariposa was having trouble getting the leaves they wanted, I took that on as my project," said Allen. "I knew the vision and kept them in the loop with the size, shape, and thickness of each leaf until it was exactly what they were looking for," she added. Foste and Allen are molding small polymer clay dragonflies and butterflies as part of the display. Plans are for 3 1/2-foot tall copper pussy willows to be placed around the tree.

Last week, Aurora Peacock of Plains created several frogs and hummingbirds from silverware. The 9.5-inch long hummingbirds are made from spoons and butter knives. The frogs, which are almost four inches long, are made from forks, spoons and half-inch screws for eyes. "The hardest part is trying to get the little pieces to hold still while I weld them," said Peacock, adding that it took her about an hour and a half to make each of the hummingbird and frogs pieces.

"Aurora's artwork is amazing," said Williams, who hasn't yet decided on the placement of her pieces at the display, but he wants to put them where they will be highlighted best. "I really like the way her pieces will contrast against the copper of the tree," he added.

The willow tree has been in the works for just over a year, although work was temporarily stopped due to the pandemic. They started work on it again in May. Nearly the entire tree is made of copper, including 250 feet of half-inch copper, 18 feet of three-quarter inch, and 14 feet of one-quarter inch. Only the base is made of steel. The trunk is three and a half inches in diameter and its four branches are three-quarters of an inch in diameter, said Foste, who used PVC pipe to mold the copper coil trunk. The trunk will have a texture that resembles that of a real willow, he said. Smaller copper tubing with small holes will be attached so water can be pumped from the tank at the base. Bill Newman, a plumber from Plains, built the water manifold and uplift pipe. Brian Pheademan of Hot Springs, an Army veteran, donated different lengths of copper wiring for the project. Foste did the majority of work, but he got help from other JOM members and volunteers John Horodyski and the late Earl Edrington.

Foste guesses they've put between 300-400 hours into the project, so far. He said that putting the leaves on the branches was probably the most time consuming because of the small delicate work it involved. Each leaf was attached to the branches with small wires to look like stems, which took around four days. A rock with a cavity in it to look like a bird nest will be placed at the top of the tree. Williams said that others will be able to add to the display. "Like most of what we do, it's a living display, always moving and changing," said Williams. The tank of water will have an electric pump at the base of the fountain to make the water go through the trunk and out the branches. It will look like a pond at the base with a wire grate above the tank to keep the gravel out of it. Plains resident John Sylvester Harp, a certified welder for more than 20 years, will be making a steel base for the tree, one of the last pieces to be done before transporting it to the nursing home. Foste said it probably won't be delivered until spring, when it'll be easier for the hospital to dig a hole for the basin.

Williams thought the tree's continuous change and rebirth was fitting for the hospital. "For me, the tree is motion and fluidity of movement and this sculpture is also designed to invite the local wildlife to come and visit the long term care unit," said Williams, who has used his artistic talents for numerous projects for veterans and the communities of Sanders County in general.

"We work hard to help the veterans in our community and a lot of the time that requires us to ask for help from the people in our community and they have always been there for us. Williams has done other art projects, mostly for veterans' awareness, such as his "Guardians of the Herd" paintings and his horse paintings to depict the branches of the military.

"Our mission is to serve our veterans and the communities they live in. Our motto is 'Through Art, Education, Therapy and Advocacy we leave no one behind,'" said Williams. JOM installed a columbarium for vets in the Plains cemetery earlier this year and sponsored a veterans boat float on the Clark Fork River last summer. 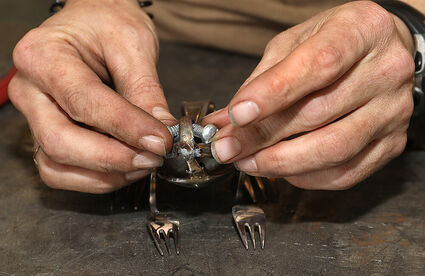 SCREWY EYES – Aurora Peacock checks to make sure the eyes will fit into the space she left on her silverware frog.

"We wanted to do a project for the community and Ed and I wanted to involve as many veterans as possible in the community to get the project done, and having just agreed to do an art donation to the hospital we thought this would be a good group project," said Williams. "The project is about bringing people and families together on a longer term project to meet new people and make new friends." Williams said he's proud to be a part of the community and also hopes the tree makes the residents at the long term care smile.

"Imagine the tree, cat tails, hummingbirds, frogs, butterflies, dragonflies. I'm hoping for a fish, maybe two. Then there will be stones placed around to catch the water allowing real birds to land, bathe and drink. Here's more than just the tree," said Williams. He believes the long term care residents will like it because it'll be a place where they can enjoy the sights and sounds of the tree. "Just the sound of the water flowing is so relaxing to the soul. Watching the glitter of the leaves as they flutter with the slightest breeze is also so relaxing," he said. "I like the tree and what it represents. It is built strong yet flexible like the veterans that helped create it and it brought us together."