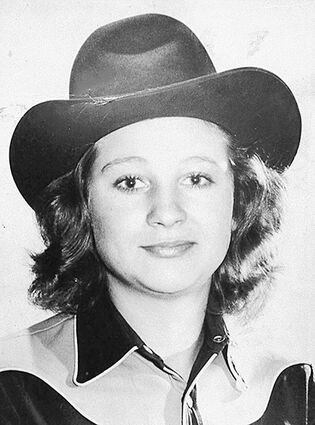 Alice E. (Yeager) Swope, 91 years old, passed away Thursday, September 24, 2021, at Hot Springs Health and Rehab Center in Hot Springs, Montana. She was born May 23, 1930, in Center, North Dakota. She was one of three children born to Mable and John Yeager, and a stepbrother, Jerome Yeager.

John, Mabel, Irene and Allie traveled to Montana in a covered wagon, homesteading at Powderville, Montana. Sister Muggy came to live with them after they settled in at Powderville. They eventually moved to a ranch on the Powder River South of Broadus.

Growing up here, they lived across the river from the Swopes. She entered her lifelong career of a rancher's wife at a young age when she met Roy E. Swope at a local dance and they both knew it was to be a lifetime together. They married on August 6, 1951, in Livingston, Montana, living in a covered wagon to begin their marriage. They lived and ranched in many places in Montana. During this time a son and daughter were born to them. She and Roy were a team running the ranch she grew up on. One always knowing what the other one was thinking just by their expression. They retired from ranching in 2002 having retired once before in 1982, making their home in Thompson Falls.

Allie thoroughly enjoyed working a long side Roy, loved her son, Floyd, and daughter, Myrene. She loved her animals, fishing, hunting, camping, gardening and baking in her later years. She enjoyed traveling, making many trips to southeastern Montana to see relatives and friends. Going to church and the senior center were a major part of her life during her senior years. A fun part of her life was yodeling. She would yodel for whomever asked her, yodeling during her last week. Her request was to have this her last big "HOORAH."

Allie was preceded in death by her husband, Roy; her parents; sisters, Margaret (Muggy) Fox, Irene (Beaner) Kogele; and stepbrother, Jerome. She is survived by her son, Floyd (Leslie) of Thompson Falls, and daughter, Myrene (Dan) Lloyd of Forsyth, along with their two daughters, Jackie (Billings) and Jamie (Colstrip) and two great-grandchildren and one great-great-grandchild, and many nieces, nephews and friends.