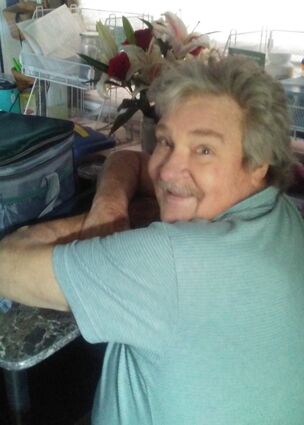 Carl Chappell (Chappy) Krauthoff, loving husband, father, brother and friend, was called home by our Lord on September 10, 2021. In the early morning hours, not 40 minutes before he passed, Chappy sent a beautiful and loving message to his "bride" Gail as his final statement. His ongoing struggle with various medical issues over the recent years only pronounced his unwavering faith in the Lord and allowed him to move through life with radiance and a smile. He is survived by his bride of 30 years, Gail; Felix, his beloved therapy cat; daughter, Dacia "DJ" Krauthoff (Jennifer) of Boston, Massachusetts; grandchildren, including Kalea, Emerson and Felix Krauthoff, Boston, Massachusetts; Dulce (Nikki) Krauthoff of Wisconsin; former daughter-in-law Carrie Moline & granddaughter Georgeanne Moline, Tucson Arizona; his half-brother Phil Krauthoff (Judith Travers) of Bethlehem, Connecticut; step grand and great-grandchildren; as well as many nieces and nephews.

Gail's mother Carolyn Siler of Pleasant Garden, North Carolina, who loved Chappy as her own, brother in-law Kenneth Siler (Idonna) of Greensboro, North Carolina, and many nieces and nephews of the Siler family.

Chappy was born to Louis and Tabitha (Tibbs) Krauthoff at Nantucket Cottage Hospital on August 9, 1958, Nantucket Island, Massachusetts. He was an educated man and a lifelong student, with multiple degrees and time spent abroad studying at the University of Oxford. His early academics were focused on Oceanography, but he then went on to earn a master's in Real Estate Appraising and degrees in Real Estate Law and Asset Protection. He was an avid surfer, like his older brother Paul, and a passionate and highly accomplished golfer. Chappy began winning golf tournaments at the young age of 8 and carried several club titles from various golf clubs around the country. In his lifetime he loved our Lord and studying his Bible and was subsequently ordained as a pastor in 2014. Chappy carried a lifelong dream to construct a large compound where all members of our family could live and work together and still have their own homes and personal space.

A celebration of life/memorial service will be held at the Plains CMA Church at 5th and 2nd on Saturday, October 2, 2021, at 3 p.m. with a reception to follow.

In lieu of flowers please donate and support the many missionaries and mission trips in our local churches. Short-Term Mission Trips (STMT) has been and continues to be the focus of our tithes and donations for the past several years.

Chappy will be greatly missed by all who knew him and those who are in Christ will see him again.