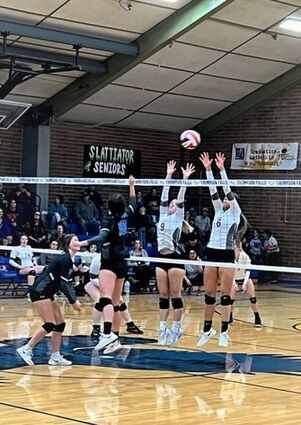 "Bump! Set! Kill!" chanted the raucous Thompson Falls student section last Tuesday night in the school's homecoming volleyball match against Plains. It was a festive night for the Blue Hawks and their fans as they rolled to their eighth straight victory in three sets against the Horseman, 25-8, 25-10, 25-7. Thompson Falls head coach Sandra Kazmierczak was appreciative of the home crowd for bringing the intensity. "We want to truly thank the student body for their support tonight and throughout the season."

Fresh off a five-set marathon win against Bigfork last Saturday, Thompson Falls was able to carry their momentum into the first set against Plains. After some back and forth scoring to start the set, junior libero Cheyla Irvine reeled off 10 straight well-placed serves to power the Blue Hawks to a 1-0 set lead.

The second set followed a similar script, this time with a different star as senior captain Elli Pardee had a 12-serve run highlighted by a number of her team-high seven aces. Pardee, a setter most of her volleyball career, has been asked recently to play middle hitter as fellow senior Scarlette Schwindt has been sidelined. The senior has embodied coach Kaz's commitment to training her players to fill multiple positions, something the program stresses from an early age. Pardee was encouraged with her team's effort Tuesday. "I feel like we are getting stronger as a team. We have great chemistry and a shared love for the game," she said. When asked what she enjoyed performing more, a perfectly placed set or a booming kill, Pardee answered like a true leader. "It's whatever the team needs. Kills are definitely exciting, but a perfect set can really get the team going."

The third set showcased some of the recent growth from the Blue Hawks as junior Ellie Baxter caught Plains off guard with a perfectly placed set into the back corner. Baxter was able to identify that Plains was out of position on the play and instead of trying to add to her team-high 14 set assists, Baxter pushed the ball into the Trotters' back corner for the point. This nuanced approach from Baxter is something Coach Kaz has noticed from the team as a whole recently. "The kids are starting to do some things on their own beyond the basic fundamentals of the game," she stated. " Most of the time without coaches having to tell them."

Thompson Falls was able to close out the third set 25-7 to win the game and kick off homecoming week in style. With most of the football team in attendance and the homecoming festivities underway, it felt appropriate to ask Coach Kaz which Blue Hawks team was better this season. Coach Kaz laughed and deferred the question to assistant coach Chrisi Robinson who was already chanting "Volleyball! volleyball! volleyball!" while pumping her fists. Robinson went on to clarify, "I'll say this much, I know we could beat them in volleyball." While a volleyball scrimmage against the football team isn't scheduled at this time, one would have to assume the Lady Hawks would be the heavy favorites in that matchup.

On Saturday the Blue Hawks traveled north to Eureka to face off against Lincoln County High School. Coach Kazmierczak knew it would be a tough matchup as Eureka was coming off of three consecutive victories against Plains, Troy and St. Ignatius. The first set didn't start out the way Coach Kazmierczak would have liked as her team trailed 2-12 in the early stages of the match. Thompson Falls rebounded to win the set however, impressing their coach in the process. "We got off to a pretty slow start but my girls love to compete. They showed resiliency and kept working hard." The Lady Hawks played a very team-oriented game, racking up 32 set assists on the night. Leading the way was Pardee with 18 set assists and senior Scarlette Schwindt with 14. It was a welcomed return for Schwindt who had previously been sidelined. Adding the senior back into the lineup gave the Blue Hawks a big boost not only with her set assists and team-high 13 kills, but also by allowing Pardee to return to her natural position of setter. Coach Kazmierczak was certainly happy to have one of her leaders back, "Scarlette is such a competitor. She's all over the court and really wants to win. The kids follow her lead. She's a lot of fun to watch."

The second and third sets weren't quite as competitive as the first with Thompson Falls winning both sets, 25-14, 25-17. The Blue Hawks were powered by impressive contributions from juniors Irvine, who led the team with 11 digs and 3 aces, Natalie Roberts (eight digs) and Avery Burgess (eight digs and eight kills), as well as senior Abbi Lane, who recorded three blocks.

The two victories last week moved the Blue Hawks' record to 10-2 overall and a perfect 7-0 in conference. Thompson Falls now enters the portion of the schedule where they will begin to see their conference rivals for the second time this season. Coach Kaz recognizes the pitfalls involved in trying to beat a team twice in one season. "The other teams in the conference have all gotten stronger. We have to be able to match their growth with our own improvements."

The Blue Hawks welcomed in Bigfork Tuesday (results were not available at press time) and play host to Mission on Thursday in what will be Thompson Falls' senior night. Coach Kazmierczak is encouraging everyone to wear pink on Thursday night as the program recognizes breast cancer awareness month.