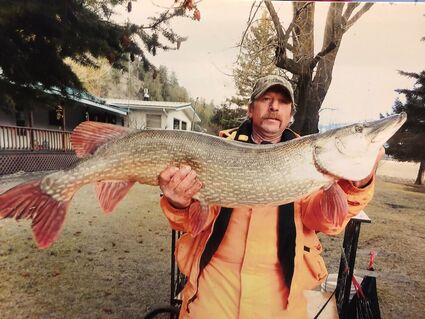 Randy Panek, 61, passed away Monday, October 11, 2021, in the presence of his wife, Carlotta, at Clark Fork Valley Hospital in Plains, Montana, after a brave battle with lung cancer.

He grew up to become a construction worker, a trade which took him all over the U.S., building bridges and wind towers. In fact, he met Carlotta while building a bridge on the Nez Perce Reservation in Idaho. After they married in 1999, she joined him in his work and the travel it required.

They settled in Plains in 2003. Plains was a perfect choice for retirement since Randy had been part of the construction teams on both bridges into and out of Paradise.

Randy loved to fish on the Clark Fork and Flathead rivers, and to ice fish on Dog Lake. He was such an avid fisherman, always generous with his catch, that locals called him "the Fish Man."

Randy is survived by his wife of 22 years, Carlotta Panek, who resides at the family residence in Plains; children Luke, Nathan and Nicole, all of Minnesota; two stepchildren, Nelson Kauffman of Coeur d'Alene, Idaho, and Jessica Glindeman of Moscow, Idaho; six brothers; three sisters; and his mother, Mary Panek of Minnesota. He leaves behind three grandchildren and five step-grandchildren.

Randy will be missed by the many friends, neighbors and strangers who enjoyed his fish frys. The Mint Casino in Plains will host a celebration of life in honor of Randy Panek on 1:30 p.m., Saturday, October 23.