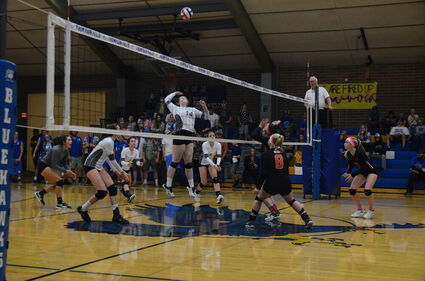 BLUE HAWK Abbie Lane jumps up for a kill against Plains earlier this season.

It was a great week to be a Blue Hawk last week as Coach Jared Koskela's football team clinched the No. 1 overall seed for the Western Division heading to the playoffs and Coach Sandra Kazmierczak's volleyball squad clinched the #1 seed for the upcoming district tournament.

It was yet another two-victory week for Kazmierczak's team as they defeated Troy (25-14, 25-12, 25-12) and then Plains (25-14, 25-9, 25-8). The Blue Hawks were led against Troy by senior captain Elli Pardee who tallied a team high with 13 set assists, five digs and four aces. Leading the Blue Hawks in kills were Scarlette Schwindt (8) and Avery Burgess (6). Also offering valuable contributions was junior Natalie Roberts with four aces and senior Abbi Lane with two blocks.

In their game against Plains it was another dominant victory powered by a similar cast of characters with Schwindt leading the team with 16 set assists and eight aces, while Burgess turned in an all-around performance with a team-high two digs and nine kills. Roberts contributed eight kills in the winning effort and Lane chipped in another two-block performance.

The two victories on the week propels the Blue Hawks record to an impressive 14-2 on the season and a perfect 10-0 in conference play. The No. 1 seed in the district, Thompson Falls heads to Mission on Friday to play the winner of Plains vs. Mission in the District 7-B volleyball tournament.

As for the undefeated football squad, they needed to win by 24 or more points against Troy last Thursday in order to clinch the first seed in the Montana 8-Nan state playoffs. The Blue Hawks made sure that their No. 1 seed was never in doubt as they jumped out to a 42-0 lead in the first quarter. Coach Koskela's squad was powered in the first quarter by touchdown rushes from seniors Nathan Schraeder (44 yards), Trae Thilmony (two yards), and two running scores by junior quarterback Elijah Ratliff (nine and 19 yards). Ratliff also pitched in a passing touchdown of 50 yards to senior Ryan Bucher before being relieved by backup quarterback Bryson LeCoure. The freshman Le Coure tacked on the last touchdown of the first quarter with a seven-yard pass to junior Josh Wilhite.

Once the Hawks had the lead, they needed to clinch the No. 1 seed. It was time to run out the clock and get some experience for the younger players. Thompson Falls added two more touchdowns courtesy of a 44-yard touchdown rush from junior Keinen Williams and a 79-yard scamper from LeCoure to bring the final score to 56-14 in favor of the Blue Hawks. Friday's game was one more 250-yard rushing performance for Thompson Falls, their eighth such performance this season.

Koskela's team will look to continue their dominance as they welcome Circle High School for the first round of the Montana 8-Man playoffs. The Blue Hawks enter the playoffs with home-field advantage throughout the playoffs, meaning all four rounds including the championship could take place at Thompson Falls High School. Kickoff is set for Saturday at 1 p.m.