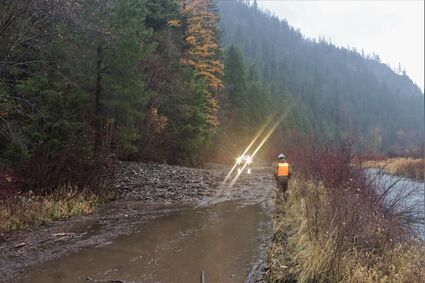 CREWS assess the damage caused by a mudslide on Thompson River Road Friday.

A mud and rock slide following rainstorms cut off Thompson River Road last week. The call for first responders came in about 2 p.m. Friday. According to Forest Service civil engineer Jesse Hunter, no one was injured in the slide, which occurred seven miles up Thompson River Road and covered the road in two places, each about 50 feet wide and up to four feet high. The slide occurred after significant rain throughout the day, and Hunter believes it could have been caused by several factors, including the previous fire in that area and the rain.

Forest Service employees barricaded the road and it will remain closed throughout the day and likely over the weekend. Because of the continuing rain, it may take a few days before they can safely get crews in to clear the road.

The Forest Service used a skid-steer to clean up most of the debris early this week, but according to them it is only mostly passable. "With that amount of mud going down that road it's going to be messy for a while," said Bobbie Bennett with the Forest Service.