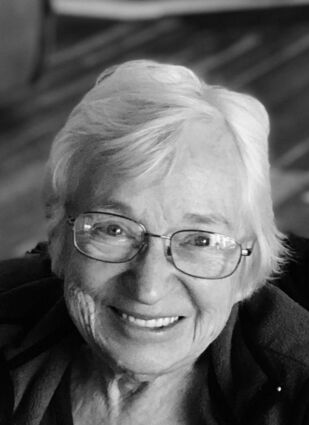 Joan Marie Huff was born May 11, 1937, at Snohomish, Washington, to parents, Elizabeth (Legocki) and Willis S Hough of Sheridan, Wyoming. She had one brother, Willis. Her father died when she was six and so the three moved to Washington D.C., then to Atlanta, Ga., when her mother remarried. After that marriage ended the three returned to Walla Walla, Washington. In October 1947 Dana Irwin became Joan's "Daddy" and the blended family included a stepbrother Carl Irwin, and stepsister, Charlotte.

In 1951 the family moved to Thompson Falls where Joan attended high school. Always painfully shy, she took a public speaking class that changed her forever. When she graduated from Thompson Falls High School in 1955 she was the first girl on her mother's side of the family to accomplish that.

She married Gary Lee Draszt on March 23, 1956 and joined him on the "Draszt" ranch on Big Beaver Creek. The couple had three children, Charles Michael, Norma Jean, and Jaqueline Lee. In 1979 they moved from the Whitepine community to Prospect Creek near Thompson Falls, and then later into town.

Although she had no further formal education she never stopped learning and forever shared her knowledge and acquired skills from friends and neighbors from Whitepine and Thompson Falls.

In 1966 she was named "Mrs. Montana Homemaker", and from that time was active wherever she lived. Her role in Grange and Home Extension clubs included offices at the local, county and state levels. As vice president of the Montana HEC she served as chairwoman for the statewide "Women in Action", a national program that recognized local women for their dedication to community service in their home communities.

She also served as representative for Sanders County within the Glacier County Tourism Region and became an active member of the "Ice Age Task Force" for the Glacial Lake Missoula project and worked to have their project presented to Congress.

Joan was an artist, working in several medias, but her greatest love was that of a writer... She wrote local news for the Sanders Co. Ledger and the Missoulian for a brief time. She inspired the Whitepine Homemakers to compile their area history as a bicentennial project, then later rewrote and published her updated version, "Echo of Crosscuts and Rails".

Her activities as a charter member of the Sanders County Historical Society included sitting as docent during the summer, after helping to set up the many theme displays in the Old Jail Museum of Thompson Falls.

She also wrote a successful grant that helped the Whitepine Grange add water and many improvements to their hall. She and husband Gary were members for 50 years.

Her personal life included learning and applying new skills. She loved to garden and put up those products she had produced. At fair time she entered her canning, baking, and garden produce, as well as creative arts and crafts. Her many ribbons were proof of her abilities in all categories. She entered and displayed her oil paintings and "conks" and shared most with friends. Joan loved to tole paint and often was heard saying... "she painted anything that did not move".

Joan and her husband Gary loved to fish from their boat and her gifts of canned smoked fish were shared with friends and family.

A voracious reader, she preferred biographies and collected Montana History books, but she also loved mysteries. Joan wrote poetry and published many of her favorites.

What she could not do she learned to do. She was always busy. During winter she was compiling a scrapbook or photo album or researching family genealogy.

But more than all that she accomplished in life, her family came first and she loved all the children, grandchildren and cherished the great grandchildren and her husband Gary. The couple celebrated their 65th anniversary.

A public graveside service will be held November 6, 2021, at 11 a.m. at the Whitepine/Trout Creek Cemetery. This will be followed by a friends and family gathering at the family home in Thompson Falls.

It is requested by the family that any desired memorial donations be made to a scholastic scholarship fund of your choice.