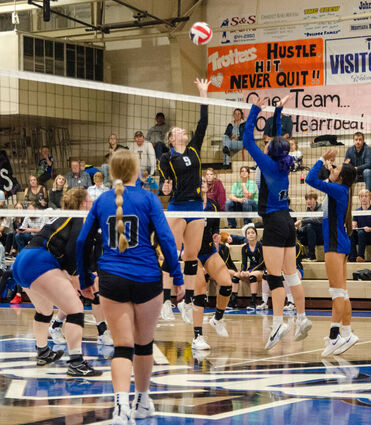 BLUE HAWK Elli Pardee reaches to tap the ball over the net against Mission during the District 7B tournament.

Thompson Falls and Plains competed this past weekend in the District 7B tournament at St. Ignatius High School.

For the Blue Hawks, it was a weekend full of dominance as they only dropped one set on their way to winning the tournament. They kicked the tournament off with a no-doubt victory over St. Ignatius in three sets (25-11, 25-7, 25-21). The Blue Hawks were led against the Bulldogs by their seniors Elli Pardee (seven set assists) and Scarlette Schwindt (seven set assists, five digs), as well as juniors Avery Burgess (eight kills) and Cheyla Irvine (six aces).

"We had some great opponents and good competition at district," Hawk Coach Sandra Kazmierczak said. "We have a strong conference and we knew we had to work hard."

In the semi-final matchup Thompson Falls was able to defeat Bigfork for a third time this season, this time in four sets (26-28, 25-9, 25-23, 25-22). Burgess tallied a team-high seven digs and a whopping 14 kills. Pardee contributed 16set assists and fellow senior Abbi Lane delivered four key blocks as the Blue Hawks advanced to the championship game against Eureka.

The championship game offered less resistance as Thompson Falls cruised to victory in three sets against the Lions (25-2, 25-17, 25-12). It was once again Schwindt (10 kills, two blocks), Pardee (12 set assists, five digs), and Burgess (four aces) who led the way for the Blue Hawks as Kazmierczak's squad won the district tournament in convincing fashion.

"We've played all these teams before, but at torunament time everyone is on the same level," Kazmierczak said.

For the Trotters, the tournament would be the conclusion of a season in which they admirably fought adversity in regard to key players missing games. After a thrilling victory over Troy on senior night two weeks ago, Plains was not able to duplicate their success this past weekend as they fell to St. Ignatius in a five-set thriller and lost in three sets to eventual second-place finisher Eureka.

The Blue Hawks will look to continue their magical season this weekend at the divisional tournament on their home court. The Hawks meet Loyola in the first round, with the game scheduled to start at 10 a.m. Kazmierczak said the team is excited to host the tournament on their home floor. She said they are working on mental toughness and staying focused. She added that her team has improved in communication and focus throughout the season, and that they are mentally prepared for this tournament. "We're excited to host divisional. It's another step of stronger teams," Kazmierczak stated.

The Blue Hawk coach added that the tournament should be fun for the whole community, and that it will be great to have the home crowd. "We've hosted district before, but this is the first time hosting such a big tournament," she said. "We're going to take it one point at a time, one set at a time. We're going to bring whatever it takes."