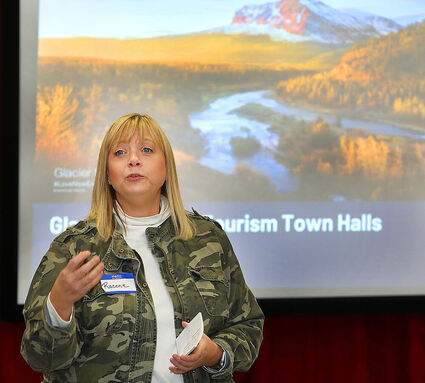 An organization that specializes in tourism met with Sanders County residents on a fact-finding mission in an effort to help the nonprofit group decide on an effective tourism plan, but making sure the people's concerns are heard.

Sixteen people showed up at the meeting Wednesday morning at the Paradise Center to participate in the Glacier Country Regional Tourism Commission Town Hall research probe. Racene Friede, the organization's CEO, said tourism is important, but it's also imperative to hear from residents about how tourism could impact their quality of life. Those in attendance of the nearly two-hour gathering were all concerned citizens from Plains, Paradise and Thompson Falls, including two business owners.

Glacier Country Regional Tourism Commission is in the process of developing a new concept called "Destination Stewardship Plan" for Sanders County, as well as for seven other counties in Western Montana. Friede said this was the first time anyone had created a Destination Stewardship Plan and felt confident they could come up with something that suits Sanders County. She had hoped more people would have showed up, but still felt the information they collected would be valuable to compile a tourism strategy.

Friede said that each of the counties where the meeting were to be held each has its own individual characteristics. It held a similar meeting in Mineral County the previous day. "Destination Stewardship is the process by which we work with local communities, governmental agencies, businesses in and outside of the tourism industry to take a multi-stakeholder approach to maintaining the cultural, environmental, economic and aesthetic integrity of our county, region and towns," said Friede. "It's a shift from solely promoting communities to engaging and stewarding communities, which in turn, provides more livable, desirable and sustainable destinations," she added.

The team will be talking with individuals one-on-one and in focus groups, and will be conducting an electronic survey. In addition, they will be holding a virtual town hall meeting on November 16 from 10 a.m. to noon for those who couldn't attend last week's meeting. To register, go to https://partners.glaciermt.com/destination-stewardship/town-hall-meetings.

Friede said the key to planning any type of tourism program is to talk with residents first-hand, and said they are presently in an information gathering mode. Friede said it would take a while to study the comments and come up with any type of findings. Though there were a mixture of sentiments about tourists at the meeting, most agreed they will come, rather they want them or not. Two Thompson Falls residents - Zach Whipple-Kilmer, owner of Limberlost Brewing Company, and Daniel Moore, owner of the Black Bear Coffee & Espresso - said they depend on tourism for their livelihood. However, both said there are ways to make tourist and resident encounters more pleasing.

The meeting was conducted by Friede, Jim McCaul, senior vice president of consulting firm MMGY NextFactor, , and Cathy Ritter, founder of Better Destinations, a travel and tourism consultant from Denver. McCaul and Ritter asked the group about the positives and negatives of tourism in Sanders County. The idea is to learn what residents and businesses feel the county is best known for and has to offer, what times of year there are too many people, just the right amount or too few travelers, who is the right visitor for the county, and what opportunities are there for the county to better benefit from visitors to the area, according to Friede.

Complaints about tourists included garbage tossed on the roadside, dogs running free in the campgrounds and parks, driving too fast, ruining trails and a lack of respect for natural resources. Friede said the 2020 rural America saw an influx of visitors from people who wanted to escape the pandemic in search of destinations with wide-open spaces and low population densities. Outdoor recreation became the activity of choice for experienced and novice recreationists and Western Montana became a top destination, according to Friede.

Moore stated that some of the biggest draws to Sanders County are the day activities, such as hiking, kayaking, fishing and viewing wildlife. "One thing that we tend not to think about, but guest rave about, is we have deer walking through town, and we have flocks of turkeys, and if you're traveling between Plains and Thompson Falls you can see bighorn sheep, and those are things we regard as hazardous traffic conditions, but tourists want to see that kind of stuff, they love that stuff," said Moore, who believes those are the kinds of things to promote in an area. However, it was pointed out that although camping is a big draw, one of the biggest infrastructure gaps is the need to upgrade campgrounds, such as water and sewer services.

Karen Thorson of Plains said that the key is to manage tourists by directing them to specific destinations, something she learned from a member of the Confederated Salish & Kootenai Tribes. Thorson believes the Paradise Center would be a great visitor destination. "The Paradise Center is a valuable place for visitors to learn not only about the history of the area - the railroad, Paradise, and the school - but also about what to see and do in northwest Montana," she said, adding that the Center has information for tourists on arts and cultural events, recreational areas, museums, golf courses, fire lookouts available for rent, and good locations for photographers to capture the landscape, as well as history of the area.

Other comments weren't as positive. One woman has noticed a large increase of visitors on some of the local trails and is worried that too many will take away the pristine wilderness. Nancy Haynes has lived in Thompson Falls over 45 years and regularly walks area trails and doesn't want them promoted. "I don't want to see them overpopulated and they're not the same as they were and they're not as appealing," said Haynes, who feels like she now has to compete with tourists. Shelley Rummel of Plains believes out-of-state hunters are pushing out local hunters, which is a sore spot to those who live here. She also said an increase in visitors would mean more crowded restaurants and heavier traffic, both of which are already a nuisance. She added that residents want to continue with the quality of life that already exists.

The facilitators talked about the pros and cons of tourism and what times of the year would be best for this community. "I work with destinations on long term visions for how we can purposely create a tourism industry and visitor economy that supports the community and feels connected to the community rather than just tourism being handled in a silo and the community has no say in it," McCaul told the crowd. He said community members should have a say in how much tourism and what type of visitors they want. McCaul added that understanding the perspective of residents is important for the program to succeed.

Glacier Country Regional Tourism Commission started in the late 1980s after the Montana legislature passed the lodging facility use tax. The organization is partly funded by the state accommodations tax. "We started off by being very much about travel promotion, now called destination marketing, but we are evolving to include destination management and stewardship," said Friede. There are three Sanders County residents - Rob Harvey of the Falls Motel in Thompson Falls, Ray Brown of the Sanders County Community Development and Juli Thurston, the Sanders County MSU Extension Service agent, on their board.

Friede said that tourists spend almost $4 billion annually in Montana and that Montanans spend a little over a billion dollars as tourists in their own state. "Some communities struggle to keep up with the influx of tourists. We really started to see our communities feeling the pressure and that's when we started looking at the stewardship project. We had to start looking at the impact against the well being of our destination overall," she said. Out of the town hall meetings and surveys, the Glacier Country Regional Tourism Commission will be building an action plan for the next 10 years, according to Friede.

"We must also measure success against the well-being of destinations and be thoughtful about how the quality of the visitor experience can be balanced with the quality of life for residents," said Friede. "As tourism has grown worldwide, destinations that failed to plan for sustainable growth have encountered adverse effects on their community and natural resources. Western Montana continues to see record visitation from travelers," she said. Friede said that her organization will make its findings transparent and will share them with the public by posting information on the project page of its website, as well as through community and media outreach