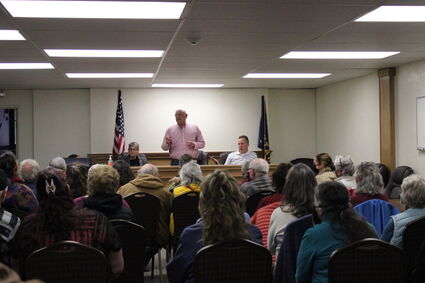 The Sanders County commissioners met last Thursday to hold a vote on a task order amendment that would involve them entering into a contract with the State of Montana and Department of Public Health and Human Services (DPHHS) to implement an immunization program for Sanders County residents.

The master contract states, “the purpose of this Task Order is to reduce the burden of vaccine preventable disease within the contractor’s service area by ensuring oversight and provision of immunization services for children, adolescents and adults.”

Nearly 40 community members attended the public meeting as the amendment for the task order states the additional services and scope of work that will be provided includes identifying additional programs and partners within local jurisdictions and developing partnerships for COVID-19 vaccine outreach, education and planning. Those who were in favor of the commissioners voting to approve the task order argued not only would the funding help with health education, but it would also help support the county budget.

Within the master contract, should Sanders County provide the services under the task order by the completion date of June 30, 2022, DPHHS will provide funding to the county of up to $7,247. Under task order amendment number one, that payment increases. The amendment states, “the funding amount of $111,481 for COVID immunization services will be disbursed upon full execution of this amendment.”

Because those in attendance were divided on the subject, commissioner Glen Magera opened the meeting for public comment. Residents from around the county voiced their opinions over the task order and the amendment.

“The money coming from DPPHS is not solely for COVID. It’s for flu clinics at the senior centers, staff wages, contact tracers, there’s a whole variety of what it’s for,” said commissioner Tony Cox. “No one should be forced, but at the same time, no one should be denied should they choose.”

Nearly everyone in the room gave their public comment to the commissioners, including resident Stacy Kandel, who asked commissioners how the funds will be allocated. “There is $111,000 for COVID immunization services. Other than flu and Women, Infants, and Children (WIC), how are you separating that out?” Kandel voiced her concerns regarding the commissioners and how they are not listening to those who oppose the task order. ‘You’re not providing the other side of the story,” she said. “Please don’t take the money.” Several of those in attendance did not want to see any COVID immunization services implemented at the schools or programs such as WIC.

“We only get reimbursed for the activities we perform,” commissioner Carol Brooker said in response. “If we don’t perform those services, we won’t take that money. We aren’t after the kids.”

Other residents urged the commissioners to vote yes, including Karen Dwyer, a contact tracer for the county. “The vaccine is still needed in Sanders County,” Dwyer said. “Let’s be able to advertise it’s available.”

Ellen Childress of Plains was also in favor of the commissioners voting yes on the task order. “Just because we accept the money doesn’t mean you don’t have freedom of choice; you still have a choice.”

After hearing all those who wanted to make a public comment, all three commissioners voted to approve the task order. “We’re not forcing people and we’re not pushing people,” Brooker said. “The money will help provide services to the underserved.”

Cox said that while the money will be used for their budget and other health services, he will also be investigating the ties between the task order and WIC. “It’s sad to me, I get along with almost everyone, but this has caused a great divide among our citizens and our county,” Cox said. “There are good parts on both sides. As for the children, that is a decision for the parents. The government shouldn’t be telling parents what to do with their children.”

Magera was the last to make a comment to those in attendance after the vote. “Everyone needs to make their own choices, that’s called freedom and it’s why I voted the way I did,” he said.

Katherine Dewitt of Thompson Falls says she’s been to previous meetings where the discussion got heated, such as Thursday’s meeting. “We don’t like that behavior and we don’t approve of it,” she said of the outspoken comments made at the meeting. “I appreciate Tony trying to be diplomatic but I think the vote was already decided before we got there. I think they put it off to get more money here.”

Mindy Ferrell of Trout Creek urged the commissioners to vote yes and says COVID prevention is only part of what the funding will do to help the county. “Chairman Magera tried to keep the meeting focused on the agenda’s topic of funding. Some of the group kept trying to get distracted onto their opinions of COVID and its treatment, but the commissioners have no say in that,” Ferrell said. “What they do have authority over is how to best balance the county’s budget. Accepting these federal funds, distributed by the state, provides a line of funding routinely to support our many different county budgets.”

Ferrell went on to say rural counties and states can’t balance their budgets solely on local taxpayer dollars. “The funds, this line of credit accepted today happen to be earmarked to support our public health problem, options for COVID prevention are but a part. Neither the county nor our state mandates anyone to take those services, but they’re available for those people who desire them. The commissioners’ critical role is balancing the county’s budget and I feel that deserves our support for doing an excellent job.”