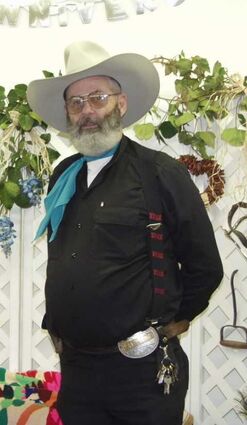 A piece of history passed on November 7, 2021, when Krazy Ernie, Ernie Franke went to be with his Sweet Mary. Ernest Eric Franke was born June 28, 1937, in Lincoln, Neb. to Walter Earnest Franke and Mary Grace Cox Franke. Ernie passed on to join his wife Mary in heaven, which was something he was looking forward to. When Mary arrived in Thompson Falls the summer of '54 and Ernie laid eyes on her he knew that was the girl he wanted to marry and on June 30, 1956, they joined hands and become one for the next 71 years

Ernie loved family, community, and country. He joined the Army Reserve right out of high school and became a Mess Sergeant. He would also receive an expert ranking with the carbine 30. This expert marksmanship would aid him in his love of the outdoors and hunting. During this time, he would also become a Boy Scout Leader and travel to New Mexico for the Boy Scout Leadership Ranch and attend a few Boy Scout Jamborees along the way.

Ernie was also involved in the Lion's Club and Jaycees. In the summers and after school he worked at Brook's Secondhand Store, Currna's Conoco, Trustworthy Hardware, and Macho I.O.A. as well as Young's Auto Body. At the age of 11 Ernie started selling the Spokesman Review, which was a daily newspaper, and the Seattle P.I. and Pennsylvania Grit which were both weekly papers.

Ernie and his wife Mary would teach the community children swimming lessons for 14 years in the summers for free including Junior and Senior Lifeguard Classes.

In 1968, Ernie and Mary would become foster parents and over the next decade they would welcome over 22 children into their home, hoping to make a difference and give them time to find their way.

In 1955, after graduation Ernie would start working at the Pack River Sawmill and continue to work there until 1978. During his time at the sawmill, he held a variety of jobs and eventually would become the Union President, then the Sales Manager and next the General Manager.

Ernie's Cycle Shop was another adventure that Ernie had when in 1960 shortly after he purchased a motorcycle from Taylor Chevrolet, he would become self-taught and learn how to repair them and put them together, thus becoming Ernie's Cycle Shop where he sold and repaired Honda motorcycles. He took this love of motorcycles to the Jaycee Roundup in the summers and would set up and emcee motorcycle races. He also coordinated and emceed the Sanders County Junior Miss Program. He was a 4H leader, coached grade school basketball, worked for Butte Service running the garbage truck, delivering freight for Burlington North and delivering fuel: oil, gas, coal and presto logs.

In 1979, Ernie and Mary started managing the Town Pump Store in Thompson Falls until 1989 when they moved on to open their own Sporting Goods Store/Pawn Shop called Krazy Ernie's Emporium on Main Street. Ernie sold guns and ammo, repaired computers, had a pawn shop, and offered other odds and ends. They would run the store until 2014 when he and his wife would officially retire and just follow their children and grandchildren. Cell phones were a great invention for them as when you called them, or they you would never know from what part of the country they were in.

A dream trip came Ernie's way when his granddaughter Ashley was stationed in Germany. Grandpa and Grandma got to travel to Germany and Ernie got to visit his father's childhood home and meet his cousin for the first time.

One thing for sure, Ernie was not going to sit around and be bored. He was busy all the time up to his last days.

Ernie's past times involved working with his hands. He loved to draw and carve and if you ever saw him waiting he always had those tools with him. He may have even taken a picture of you and then turned that picture into a drawing.